I love how that sounds (there should be a song-anybody?)

And if you were to realize the actually real historical housing area here in Lafayette that is Freetown it would make an even better fit--as some will say VooDoo/HooDoo or perhaps even Zombies comes from an African root...

Shall we Wikipedia that...

"Zombie ...is a term used to denote an animated corpse brought back to life by mystical means such as witchcraft. The term is often figuratively applied to describe a hypnotized person bereft of consciousness and self-awareness, yet ambulant and able to respond to surrounding stimuli. Since the late 19th century, zombies have acquired notable popularity, especially in North American and European folklore.
In modern times, the term "zombie" has been applied to an undead race in horror fiction, largely drawn from George A. Romero's 1968 film Night of the Living Dead. They have appeared as plot devices in various books, films and in television shows."

Before I get to the rest of the Why are Zombies in Freetown...

I must revisit what little I know of Zombies from movies I have seen & only due to having 2 sons 1 of which was a horror fan (this probably in part from letting that baby boy watch Altered States at an age where we didn't really think he was getting anything from it but "monkey movie" - Mommie, I want to watch the "monkey movie" again?! hmmm...maybe we should of rethought that movie selection?!)

Has anyone looked at the list, the long/Long/Really Long list of Zombie Movies...OMGoodness I had No Idea?!

Link to Wiki - again - if you care to dare to see How Few Zombie Movies You've Actually Watched?!
http://en.wikipedia.org/wiki/List_of_zombie_films

??? (too many on the list to keep looking thru, but lean toward the humorous Zombie movies...)

A Classic Horro/Zombie Movie I did not see, but am thinking maybe I should watch the beginning (or the end) one day...from back in 1932 (like the Dark Ages) 'White Zombie' was made & you have to wonder did that start off the trend to make Zombie Movies or what?!

Which brings me to the Band 'White Zombie' & the Rob Zombie who worked with Trent Reznor of Nine Inch Nails for his movie soundtrack (which again our oldest son discovered Nine Inch Nails from a cassette his Dad had laying around in an old cassette case - in maybe Middle School or High School...so another cautionary parental advice from this tale--hide the horror movies & the heavy metal media before the kids find them?!)

"The former White Zombie frontman takes that same approach in his other artistic endeavour. In addition to writing and directing horror flicks such as House of 1000 Corpses, The Devil’s Rejects, the Halloween re-makes and the 2009 animated film The Haunted World of El Superbeasto..."

Link to read more of what Rob Zombie & his backup band The Devil's Rejects are doing...
http://www.uptownmag.com/music/features/The-real-Rob-Zombie-125907449.html

And so from the boy listening to a Nine Inch Nails cassette way back when (anyone remember cassettes) & finding out more about Trent Reznor he got to watch at least one of these Rob Zombie movies listed above, with I'm sure Zombies in them... 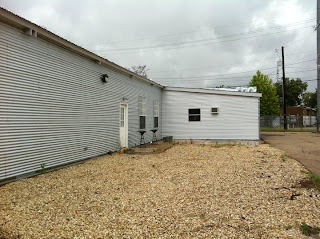 Back to Freetown Lafayette, LA & now Freetown Studios - who hosted the Zombie Safe House Competition originators talk last night at this new (as of end of Oct) Non-profit Art Space... 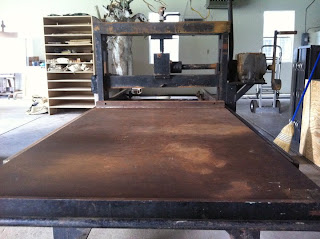 photo credit: from Freetown Studios Facebook page...
(note: behind the huge printing press--there is an equally huge sculpture of what looks like a tree... imagine this in the studio at night, shadows cast, sitting in chairs listening to talk about Zombies & Zombie Safe Houses & thinking--what kinda horror movie could ya' make with this tree...also that I would 'not' want to be alone in the studio late at night...shiver...imagination running wild?!)
Link to Freetown Studios webpage...
http://www.freetownstudios.org/Links.html

Event descritpion from the webpage...

NOV 8th: The Zombie Safehouse Project presents the current 2011 entries and information regarding its present project and collaboration with Seattle's ZomBCon - a international ZomB Conference. Join us at Freetown Studios - open to the public. for more info email us at freetownstudios@yahoo.com -
Tuesday Nov 8th @ 6:30
note: later, as of the day of, would find out it opened at 7:30pm with the talk starting at 8:00pm until...
I was 1 of the Public & just made it?! Was wondering where all the rest of Lafayette was--they missed out I thought on seeing behind the scenes of not only Freetown Studios Space but also the Zombie Safe House guys...if there's a book (or when there's a book) am so hoping they will include all the 'stories' & fun that brought them to this competition idea... 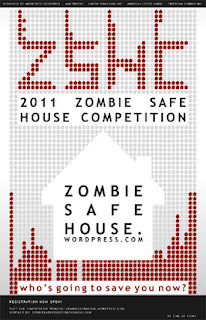 note: I esp love the 2 Brits that made an entire newspaper around their entry & spoofed adverts along the way, including IKEA - or in their Zombie Safe World it's IKEAK...(really I think IKEA should jump in on this fun - a boxed working model of their safe pod would be Fabulous - I say talk them into that for next year's competition or display at ZombieCon 2012?!)

Also the Map on their webpabe - of Where there is a Zombie Safe House/Region being created or Who Will Save the World if there's a Zombie Apocalypse...lucky for us Lafayette has at least 5 in the area & 2 more not far away...(or so that's this year, on to the next year & who knows...)

I love the local Lafayette sponsors & that this is 'not' just an Architectural Contest by no means...

CootieVanGhoul  www.cootievonghoul.wordpress.com
(note: extra love for Katie as I own a Swamp She Creature print--really I should go for a painting before she gets unaffordable?!) 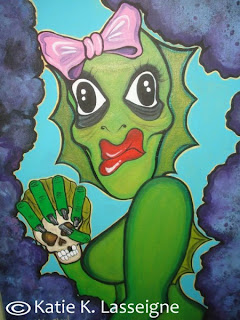 And she's mine?!
(OK, so at least a print--whomever got the painting is lucky also?!)

Link to the Sponsors on Zombie Safe House webpage...
http://zombiesafehouse.wordpress.com/sponsors/

Zombie Walk too was this past Halloween here in downtown Lafayette (missed it)--maybe next year, a working model of a Zombie Safe House & after that, again, who knows?!

Link to article on the where/when of Zombie Walk Lafayette 2011...
http://www.theind.com/arts-a-entertainment/86-aae/9287-get-your-zombie-on

(note: did not know there's a Zombie Month - May - nor that there is a Zombie Attack Preparedness Team... am learning more than I ever wanted to know about Zombies & I don't even have to leave town?!)

Link to the Z.A.P.T. Facebook page--in case you want to know more too...& be prepared?!
http://www.facebook.com/pages/ZAPT-Zombie-Attack-Preparedness-Team/88660616943?sk=info

(note: you can check out "Specialized Tactical Undead Disposal" or S.T.U.D. among other things there...)
Posted by Sharon In A Volvo at 11:40 AM