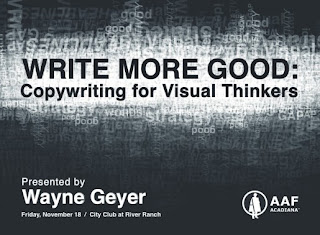 Knew I was in for something very clever after the first line--Write More Good...
when I received this postcard in the mail as a reminder for the AAF November Luncheon...
River Ranch - City Club
November 18, 2011 - Friday

From AAF's webpage about the speaker, Wayne Geyer... 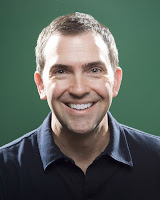 photo credit: AAF/Wayne Geyer webpage headshot...
(I need one of these, must work on that--as that free LinkedIn one didn't pan out...)
"For a lot of designers, art directors and other “visual people,” the idea of writing headlines and copy can be intimidating. But visual communication is still communication — and it often starts with a written idea.
Link to AAF Acadiana webpage to read more...say his clients/brands & awards...
http://aafacadiana.com/2011/11/november-luncheon/#disqus_thread

Wayne Geyer makes brands sound more interesting. To do that, he works with designers, art directors and anyone else who has a story to tell about a product or service. If that sounds like copywriting, it isn’t. It’s more like 23% writing, and 77% knowing what to write about. You can ponder this and other Wayneisms in his “Write More Good” workshops, where he helps people who draw learn how to write. Yes, that means you—because it’s specifically designed for “visual thinkers” who want strategic tools and writing tips to solve their communication problems.

Since he left his dream job in the pizza delivery industry, Wayne has addressed large groups of people at places like the HOW Design Conference, the ad clubs in Fargo and Oklahoma City, the AIGA Austin Design Ranch and the National Student Show."

Link to his webpage...
http://www.waynegeyer.com/main.php

Note: especially love that he's charting on a map of the states--where he's eaten cheeseburgers...now must remember to ask my sister who lives in Florida a recommendation to pass on to him when he makes it there for a cheeseburger?!

Or - NoCilantroDotCom is another of his clever asides... 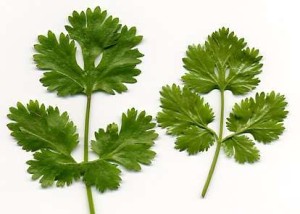 (note: there is even an "I hate Cilantro" webpage...& did you know - thanks Wiki - that coriander is cilantro, where have I been?! ...apparently not in my kitchen/not using this herb...& on his webpage he doesn't use an image of the leaves or plant, he only uses the bright green color on the pages...)

Well, I've requested a pdf of the highlights from the talk he made - since I didn't take notes after he told us we could do that...it was complete with 3 questions & 3 gifts to go along with being able to answer them...2 were good books & 1 was to Cafe Cohen Coffeeshop in Great Harvest (which as I'm a regular it's OK I missed winning that...) I thought right after each question--I should know that & then if I did would I really raise my hand to answer out loud (prob not--because...can you spell 'panic attack'?!)

His Challenge...
Can you distill any creative challenge down to 5 words (or fewer)?
He had a number of examples of what he'd started with, say 'boring' & what he ended up with...

A tip of his...
Put Down the Stock Book

Thank you Mr 'Service with a Smirk?!'
(note: borrowed from his webpage, if you say go to look at his Words that Cost You More list - which I'm guessing are words he really dislikes using & so they would cost you more, maybe, if you insist on using them in your copy...this phrase 'service with a smirk' will show up under his name there on that page--you have to keep a quick eye on his webpage I'm guessing?! as he will also call himself other things under other subjects...)

or otherwise known for real as Wayne G -eye- r
(note: after his slide of a notebook he made with his last name in different colored letters in order to show the emphasis on the 'eye' center part in order to say his last name correctly--I will like...never forget, now how clever is that--am I a visual learner then? hmmm...perhaps & didn't know it, or we all are & didn't know it as well...thus comes the creativity of a clever copywriter--say that last line 5 times really fast...)

Link where I found the Addy Awards list...
(note: Wow--there are lots of  'em, so there could be more won by copywriter/writer Wayne Geyer & group that I just didn't see...have seen some of his ad copy on slides during this talk last Friday, which was great fun & can see why he would receive awards - from clever, fun/funny or thinking outside the box kind of perspective if nothing else...)
http://www.dcadclub.com/content.asp?contentid=585 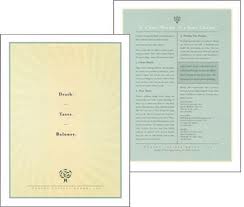 Link to this advert/copy example, that he did also show as a slide during his talk...
http://www.waynegeyer.com/copywriting/examples/baloney.php

(note: so he's added to the old phrase - well known/worn or not, is it an idiom? that there's only 2 certain things in life: Death & Taxes...here he's added another word: Baloney--do you want to read more? of course you do?!) 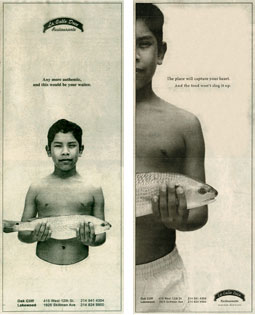 "Any more authentic, and this
would be your waiter."

Link to this example & where you can read more...
http://www.waynegeyer.com/copywriting/examples/clog.php
(note: I especially loved the story behind this photo, out of a day full of photoshooting that this synchronicity would happen is just marvelous & the image is sooo right...) 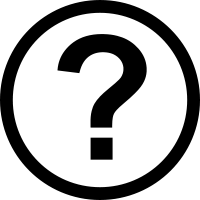 from WikiCommons--because I can & it's not copyrighted...

During the talk, you could win 2 books or coffee & still many of us couldn't answer...

I've forgotten that last question & am I pulling a "Rick Perry" answer--No, I've just forgotten the question during the hour talk that was jammed packed full of what was it? over a 100 or was it 200 slides?! tho am guessing this will 'not' be on the pdf of the highlights from his talk I've just remembered to request... 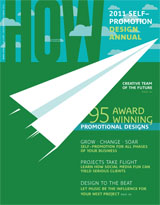 current issue of HOW magazine...

Wayne Geyer is also a contributor to How Magazine...
http://www.howdesign.com/
Twitter: @HOWbrand
(note: so I went to look under his Bragging section - Yes, he called it that - to find this out & was curious to read more & so now I've found another online design magazine...that I may get hooked on, Oh No...Oh Yes...Oh Yeah...btw did not find an article by him right off, was just skimming--another time to dig deeper...)

Fun Find: on his webpage under All Things Wayne...under Things...there is the word: Coffee...

Wayne's Coffee
(note: oddly enough, I have been to a Wayne's Coffee in Stavanger, Norway...actually it opened while I was living there & many of us were very excited to have this coffeeshop coming to downtown...they were going to have American style bagels & some of us expats were even more excited about that possibility--if you've even been in a land of Nordic food you'd understand?!)

Link to Wayne's Coffee in Stavanger, Norway - in the Storscenter...
http://www.waynescoffee.no/stvgstorsenter.html
(note: my benchmark everywhere in the coffee world is to order an espresso, single shot...there in Norway you would order a "Cortado" - in the US few barista's know what I'm talking about, except...to date...Jason at Cafe Cohen in Great Harvest does...now this is getting to feel like/sound like '6 degrees of separation' - only from Waye Geyer to me & what I know to be true?! O-o...)

note: could not find either on YouTube, but they are on his webpage under Playing...
then the words: Firefly...Marathon Song...

Firefly is played by Dragonfly 32 - the band - again couldn't find on YouTube...
but if you Google you come up with the EuroVision in Helsinki, Finland - Winners from 2007 - called simply Dragonfly & they were from Croatia...so is 'this' band playing up on that? I do wonder--will I ever find out? doubt it, but it's curious...(could I ask the Guitar player? hmmm...one day, maybe...or maybe not...) 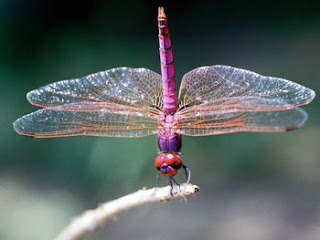 since the word has been brought up & I <3 the dragonfly...
photo credit: from Buzzle.com...
what I love are 2 things--1) pink 2) standing on head
(note: I have never seen either a pink dragonfly, nor one standing on it's head...so deff an outside the box kind of image for me--I did not go to the StockBook btw...I Googled it instead, is that just as bad?!...no, don't tell me...I will end with this, pink dragonfly standing on head...)
Posted by Sharon In A Volvo at 1:37 AM