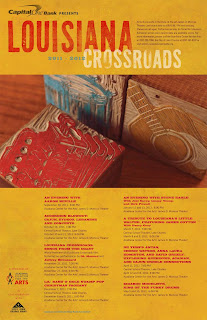 poster from AcA webpage
SONGS FROM THE COAST


Louisiana Crossroads, the award-winning concert series, radio broadcast and television program, is continuing its 12th season with exciting new energy while remaining true to its deep roots that are so highly valued by audiences in Southwest Louisiana and around the world!

Songs from the Coast  highlights the exceptional work and stories of Louisiana musicians, their personal crossroads and journeys as musicians. The film features Louisiana artists Irma Thomas*  (filmed at the AcA in June), Sonny Landreth* (also filmed at the AcA), Allen Toussaint* with the Preservation Hall Jazz Band, DL Menard* and a soundtrack of original music recorded live. 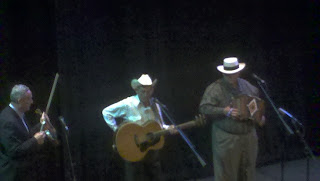 photo credit: me on my cell phone, at the Sunday afternoon showing of Songs from the Coast - here DL Menard on the guitar in the middle, with a fiddle & a squeeze box on either side
Following the premiere, join us for a Q & A with the filmmakers and live performances by Cajun/Creole greats DL Menard and Jeffrey Broussard.

Louisiana Crossroads Director Dirk Powell explains, "We have so much to celebrate. And I know that, in true Louisiana style, the celebration will not only honor what is past but strengthen immeasurably what is to come.”


Don’t miss this rare chance to celebrate a work that encapsulates artistic achievement on multiple levels and in multiple genres, a collaborative effort that will resonate with audiences across the board... 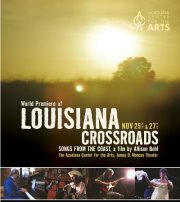 Link to the Facebook page for Songs from the Coast - World Premier of Louisiana Crossroads Film...
http://www.facebook.com/event.php?eid=255014191217326&ref=nf 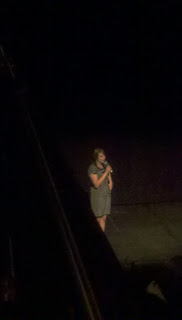 photo credit: me, on the cell phone up in the Mezzanine at AcA theatre - of Allison Bohl speaking after Songs from the Coast film played & before DL Menard played us a few songs

Link to - finally - the director...Allison Bohl...
http://allisonbohl.com/home.html
(note: whose name is curiously absent in a lot of this promo for the LA Crossroads/Songs from the Coast/AcA...)

"Bohl has just completed her first feature length documentary "King Crawfish" about the annual celebration of the Breaux Bridge Crawfish Festival and the Catahoula wild harvest Basin crawfishermen who provide their community with crawfish."

(note: even better than Sand maybe & I dearly love the seashore...Yes, Forts--like you use to build in your bedroom when you were a kid, or under the sheets on the clothesline...grew up with my grandmother so I know about clotheslines & sheets hanging to dry, for real...I like these photos, may have a few of the Forts my 2 boys built on many/Many an afternoon/evening when they were growing up in Lafayette, LA...of all the places?!)

websites for artists by artists

Link to article in The Advertiser with a photo of where I saw her first speak - Allison Bohl...at the Creative Economy Summit at the LITE Center...
http://www.theadvertiser.com/article/20111110/NEWS01/111100358/Art-industry
(note: she was speaking also about the King Crawfish documentary with film maker Conni Castille...) 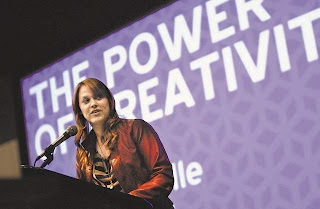 photo credit: The Advertiser - by Leslie Westbrook
Article: Art as Industry by Amanda McElfresh
Link to more about the Creative Economy Summit Series...
here their webpage & they also have a Facebook page...
(note: see blog post about them earlier, CES & their 1st in the series which was held on 11/9/11...)
Link to more Allison Bohl on Vimeo...where there are 40 videos...
http://vimeo.com/allisonbohl
*More about the artists of Songs from the Coast film...
*D.L. Menard
I guess if my first name was Doris I would use my initials too--talk about a Boy Named Sue?!
Link to his Wikipedia (can you imagine having one - or - telling folks, Oh you can just read about me on Wikipedia if you'd like...)
http://en.wikipedia.org/wiki/D._L._Menard
His best known song "La Porte En Arrière/The Back Door" - he sang at the film premier on stage
he also sang a song from the Bachelor's Life & I've forgotten another--but the only one I'd heard before was "Listen to me when I talk to you" (tho I can't seem to find it on lists of his songs...the first time I heard that played was by BonSoir Catin on their Vive l'Amour 2009 CD...**song & translation to follow below, because it's a fun one--again his sense of humor comes out, is it him or is it Cajun or is it both...)
Link to YouTube of the famous or is that infamous--The Back Door by D.L. Menard...
http://youtu.be/nf0he709d1k
(note: this man could be no more Cajun & I adore his sense of humor - he had us all laughing in the crowd at AcA inbetween the songs he played after the Songs from the Coast film?!)
**
Link to Bon Soir Catin--thank you for sharing the lyrics in French & English & as well the little story about D.L. Menard...
www.BONSOIRCATIN.COM


One afternoon at the Dewey Balfa Cajun and
Creole Heritage Week in Chicot State Park D.L.
Menard joined us for a workshop
performance. He sang many songs and told
many stories. When he broke into this song,
Christine fell in love with it and looked at us
from across tent with a smirk. We knew we
just had to record it. Jude plays a cardboard
box on this cut with the lope that only a real
cowboy could understand.

Listen To Me
When I Talk To You

Note: wish I could find a YouTube/Vimeo of these girls singing this song, but I only have my CD to listen to...maybe I should buy D.L. Menard's CD with the original song sung by him on it too?!

in the film Songs from the Coast - she was interviewed before/after her performance at the AcA...
I can only remember one song as it's another Favorite of mine, esp during Mardi Gras--I only know it too as the 'flag song'...for this version she decided to make it a 'second string' experience & have everyone hold up & wave a white handkerchief or tissue or whatever else they could improvise with (which a few did, as they panned out with the camera to the crowd I could see some paper signs & such being waved around...) & of course everyone had to get up outta their seats & engage their rear gear (tho I know she had a better name for it, you'll have to watch the film to find out?!)

Link to Iko Iko - aka the Flag Song - Wikipedia to the rescue...
http://en.wikipedia.org/wiki/Iko_Iko

Link to her webpage...
www.irmathomas.com

Link to her Wikipedia...
http://en.wikipedia.org/wiki/Irma_Thomas


Link to some great photos of her - Irma Thomas - by Jeff G Photography...with The Professionals as her backup band - looking just like she does in that same dress in the film Songs from the Coast, which was if I read correctly was filmed while she was performing at the AcA earlier...
http://www.flickr.com/photos/jeffjeffjeffjeff/5973824185/
(note: esp love this photo of her out of his photostream...as I can't copy it, even just to share one from the Flickr album...)

my side story...
I've met his lovely sweet almost shy girl friend Megan Barra at this years Women Who Mean Business event in Lafayette, LA (read more about the event here if you're curious:  http://www.theind.com/business-cover/8914-women-who-mean-business-2011) where I had the best of luck to also end up sitting next to her - though she didn't speak on stage this year, she had in the past so she was given a red rose & asked to stand before this year's nominees/speakers began...at first I only knew of her by way of her gorgeous silk art I'd seen at the AcA in The Vault gallery earlier - telling her I had wanted to buy 1 of the pieces only saw it had a red dot on it so guessed it was sold (it was of a coffee cup, coffee being another favorite thing of mine it woulda been perfect...sigh...another time, if she makes more...) but somewhere along the way in the conversation - surprisening myself I could talk to an artist that I thought might be famous enough for that, only to find out there was more to her story...only too late for me to get nervous though, as I was sitting to the left of her I just kept on talking...came out the boyfriend who played the slide guitar, a famous one, though even when she said his name I had to ask more--then I realized I'd seen him at the Int'l Festival this year on the main stage, the Popeye stage, & maybe even took a long distance photo of him on stage...(it seemed at the time, my spouse knew him better than I did - so really he was the reason we were probably standing there in the first place...let me go find those Thursday Night, Opening Night, Festival photos...) 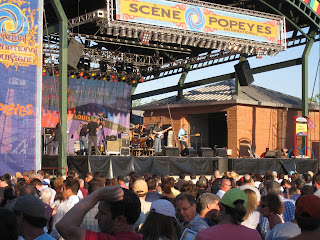 photo credit: me, does look like Sonny Landreth with his slide guitar up there on the Popeye Stage during the Festivale International doesn't it...in the film Songs from the Coast you can see the cameras up on the stage behind him during this & now I'm wondering 'where's that big camera' - or maybe we didn't stand around long enough to see them, but we can still say 'we were there'?!

once again am caught thinking, it can be a small/big world here in Lafayette & the tiny circles like this can make you dizzy--but I love it all the same?! 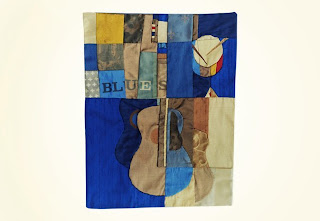 Megan Barra - silk composition - Delta Blues
(someone else's guitar maybe or is this/has she done Sonny's guitar/s in silk? hmmm...can only guess, maybe so with all her compositions of musical instruments...but I'm still craving the coffee cup instead of course...)

Link to her - the girlfriend - webpage - with of all the photos on the home page, it's of Sonny & his guitar, plus his guitar perhaps done in her silks...but then she's done his CD packaging (plus some t-shirts) as well, wearing her Designer hat, so that may be another reason he's on the home page...(taking note down the list of Artist's she's also done a CD package for D.L. Menard - Happy Go Lucky...who's in the film Songs from the Coast too of course...more little merry Cajunland circles?!)
http://meganbarra.com/

Link to an interview of Sonny on Pure Music - here on page 14 he talks about his girl friend...nothing but good/Good things, what a guy, what a boyfriend...
http://www.puremusic.com/pdf/landreth.pdf


Link to his - the boyfriend - webpage...
www.sonnylandreth.com/

Link to his Wikipedia...
http://en.wikipedia.org/wiki/Sonny_Landreth

Link to him on NPR - did not realize all these artists/musians were on there/archived...
http://www.npr.org/artists/15782632/sonny-landreth

Link to YouTube of him playing Blue Tarp Blues (aka The Katrina Song) at the International Festival in Lafayette, LA - posted April 30, 2011...thank you Butternut121?!
http://www.youtube.com/watch?v=HZv4UrJ6D_8

Link to his webpage...
http://www.allentoussaint.com/

Link to his Wikipedia...
http://en.wikipedia.org/wiki/Allen_Toussaint

Link to Preservation Hall Jazz Band...he played with them in the film Songs of the Coast...
http://www.preservationhall.com/band/index.aspx

(note: I did not stay Friday after the movie, nor even for the movie--so I missed Jeffery Broussard playing & on Sunday when I went again I only saw DL Menard as he was playing inside the theatre right after the movie...then I had to leave, but I heard them playing w/his accordion in the mix as I was walking out the door & folks were up on the wooden dance floor already as they'd put down a portable wooden dance floor in the ready, because of course you have to dance to Cajun/Zydeco music when you hear it--so I danced my way to the door, kinda, ducking & dodging all the crowd left in the lobby...)

Happy & Lucky that I was an AcA volunteer for the night to make it to the 12th Season of LA Crossroads & the world premier of the Songs from the Coast movie & to hear D.L. Menard play afterwards - we'll see if I'll be here again next year for Lucky number 13?!
Posted by Sharon In A Volvo at 12:56 AM