AcA
(C)ollaborate 78
Paige Krause
I've Stopped Having that Dream I've Been Having
Nov 12, 2011 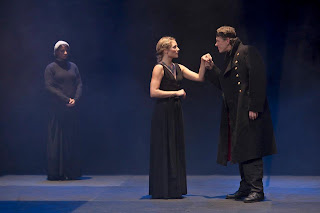 photo credit from their Facebook photo album...
note: this would be Macbeth, he as the new king & his wife as the new queen w/the lady in waiting to the background...so much was done w/just lighting on stage, some fog machine fog & black clothes--you just simply got lost in the story/the tradegy, because of the actors who were to me as if transformed & in the scene of Shakespeare - no matter a set composed of Hollywood proportions missing...it could of been 2 hrs or it could of been 2 days, I was just mesmerized - my only complaint was not being able to understand all the dialogue (but w/Shakespeare I don't think I ever had...) It was excellent that they ad a Scotsman, if I were to swear to it, play the part of a soldier who was to be a Scotsman...as some will call this play, the 'Scottish' play - very fitting...

"...mission is to make classical works accessible to the greatest number.
A play becomes 'classical' because we recognize that after a time it transcends the orig culture it was created for. It retains the power to provoke the central question of what it means to be human. As a company dedicated to the classics, we feel a responsibility to acknowledge & explore newfound classical works. Founded in London in 1991 by Peter Meineck, Aquila is now based in NYC..."

(note: if you don't recall this is what the witches will say...something like Bubble bubble--Toil & Trouble...which is exactly what witches were known to do--stir up troubles?!)

A dance/music/installation piece that incorporates the sincerity of humanistic connections. Krause creates a unique performance by investigating & introducing her own voice within the modern dance genre. Four performers challenge the line between reality & fantasy while interpreting & unfolding the complex interactions of relationships between individuality & uniformity.

This exciting & inventive performance uses the flexibility of the theater to transform the space into a live installation, performed to an original & live score from composer Philippe Landry."

note: as equally excited for the performance as I was for the live score--both were amazing in that space, I was spellbound...

(note: I took a photo of the instrument, before I knew what it was - put up on Twitter, What is this instrument...with no takers I had to go ask someone, then looked it up online - what I wouldn't do w/o Google or Wiki?!)

He (Philippe) totally had me at the sound of that Harmonium...

Link to Wiki--if you're asking What is a Harmonium...
http://en.wikipedia.org/wiki/Harmonium

Link to YouTube of the performance, but another time, another place...
http://www.youtube.com/watch?v=Cye6yuYRIjo&feature=youtu.be

note: of what I think was the first performance back in April of the piece - in this recent full piece in AcA there is the set design difference & 1 less guy performer, Brian Guidry (though now I could swear I saw him in the audience or in the lobby of the theater on the Saturday night performance when I was there...)

Note: on stage...4 performers, 3 girls, 1 guy, 4 plastic chairs w/metal legs, a large tapped up sheet of clearish plastic...w/the stringed outline & lighting, that's it...other than the sound effects/music/spoken words - which added to the whole as nothing else could...sounds so simple & yet their moves were so together & so many, I cannot imagine ever being able to remember that many moves thru hours of just sounds (as they said without a counted out measure of a musical score - or that the trained dancers mentioned as being the hardest parts in the talk afterwards...which I loved hearing their voices & them all talking about the background of these dreams or whatever else in putting this performance so well put together...) To have gotten to see this in Lafayette is just as astounding in my mind?!

Link to AcA Facebook page - for more about the performance...
http://www.facebook.com/acadiana.arts

Link to The Ind article...
http://www.theind.com/arts-a-entertainment/86-aae/9346-dream-dance-performance-at-aca


Find more photos like this on Contemporary Performance Network


Link to LouisianaEsthetic by Reggie Michael Rodrique - all the pleasure & pain of contemporary art in South Louisiana...
http://louisianaesthetic.com/2011/11/11/dancing-dreams-ive-stopped-having-that-dream-ive-been-having/
Posted by Sharon In A Volvo at 12:59 AM