Lives of the (everyday) Saints 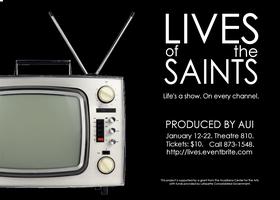 Lives of the (*everyday) Saints
*or that's what I would of called it...
by David Ives

First produced in Aug of 1999 - I continue to wonder what was I doing/where was I living & How Did I Miss This?!

(note: I thought they should surely play 'Enigma' here to start/stop the sketch - but really whomever chose the music as is did a really interesting job of it & perhaps that too was a part of the whole play...I wouldn't know unless I ask the Director...one day - or on Twitter, where people will answer you that you'd never dream would?!)

The Mystery at Twicknam Vicarage

Intermission (Yes, this is from the Program)

(note: the Star a washing machine--which I'd never seen done before & I Liked It?!)

Lives of the Saints

Under each Sketch in each Act they listed the actors, which often repeated - so will just list them all alphabetically...

I went Thursday the 19th at 7:30 pm (before I left for the w/e to Houston, TX)
And of course went directly next door for a Gelato at Carpe Diem Gelato-Espresso Bar during Intermission  having earlier had my espresso there too while putting up posters as Super Awesome AcA Volunteer (a new title, was given Awesome--added Super...because of course we 'all' want to be, if not Saints, then Super Heroes?!)

From the postcard handout...

"AUI will kick off the 2012 performance calendar at Theatre 810 with Lives of the Saints, an evening of riotously funny one-act comedies by one of the contemporary theatre's brightest comic playwrights, David Ives.

Lives of Saints is an evening of  7 quirky, funny & wildly imaginative one-acts by Ives.
In Saints, Ives' comic imagination takes audiences to ancient Mesopotamia for the construction of the Tower of Babel...

...to a wee British vicarage for a twisted "Masterpiece Theatre" murder mystery...

The Mystery at Twicknam Vicarage

...to a quirky souvenir shop where a wildly exotic love blooms...

...and into a TV set where a couple finds themselves lost in a blur of channels...

And that's just half the evening.

Local audiences have experienced Ives' work in his other one-act evening All in the Timing & in his revisionist take on Don Juan, Don Juan in Chicago.

Lives of the Saints is directed by Cara Hayden, who co-directed AUI's summer production of A Midsummer Night's Dream. (Wait I saw that, maybe I have seen Cara before & didn't even know it - I'm bad like that?!)

The production features performances by..." (note: see my list of Cast above alphabetically)

Enigma Variations - which was at first confusing, but fun to figure out as you went along - this interesting De-ja-vu twist w/a troubled girl visiting the Dr's office...
I've since asked Elaine via Twitter how they all/she managed to keep in body/motion synch throughout the one-act without being directly across from each other - I would of found that difficult, as well as the parts without speaking as you mimed what the other 'you' was doing...also liked the unexpected part of patients exchanging doctors parts...but all in all have to wonder why this was chosen as the first bit, if any of the one-acts do fit together one to the other?! 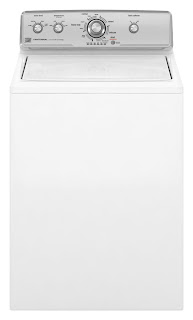 (photo credit: maytag.com - traditional top loader - the Centennial Trademark edition...haven't a clue what they really used in the play The Lives of Saints - one act - Soap Opera...but it was deff a top loader, or how else would washing machine Goddess White pop out of the Maypole washing machine?!)
Soap Opera - OK, just hands down my fav one-act...I adore the play on a 'Maytag' & the proverbial bored Repairman because of the perfect repair record of such a washing machine (as portrayed in many an advertisement/commercial on TV) - in this play/this one-act they call the washing machine a Maypole & there's a real girl/to be girl friend who's a Mabel (if I followed this naming thing correctly--plus that sounds alot like Maypole too...) But the "Goddess in the Machine" was perfect & what fun, all the further play on words or objects that have to do with said washing machine or repairman...I mean it starts off with him trying to take his washing machine on a date to a fancy restaurant?!

Lives of Saints - confusing as it's the overall name of the play & also one of the one-acts in Act II...
two lovely old friends/old ladies who organize the church food for the funerals - it was odd enough to hear the sounds of their kitchen movements, as it was when they were revealed in the middle of the act (now how they coordinated that with keywords in the dialog I guess was something else--I would of missed those cues for sure, to make those sounds of opening cupboards or drawers or mixers or running water, etc...)

After that one-act & in thinking back on it being the overall name, it's when I felt like it was really the Lives of Everyday Saints instead he was talking about...but that's my opinion of course, must read more of what's behind this combination of one-acts...

Link to AUI - Acting Unlimted Inc - to read more about the play: The Lives of the Saints...
http://actingunlimitedinc.org/

"Acting Unlimited and Theatre 810 have been in the news today! The Baton Rouge Advocate ran a feature on the theatre space and our show LIVES OF THE SAINTS in the Monday, January 2nd edition, and KLFY, Channel 10, filmed a feature this afternoon at the space. There will be a link to that video posted as soon as it becomes available. Keep an eye on AUI and Theatre 810! 2012 has started with a bang!"

Link to one review & prob better description than I managed...
"Leave Room for Jell-O - A brilliant trip through Ives Country, with an unexpected detour"
by Cary M. Mazer of CityPaper.Net after watching the performance I'm guessing with the Philadelphia Theatre Co. at Plays & Players Theatre
http://www.english.upenn.edu/~cmazer/lives.html
(note: the reviewer leaned toward the Lives of the Saints rather than Soap Opera for their memorable one-act...it's curious how that works huh?!) 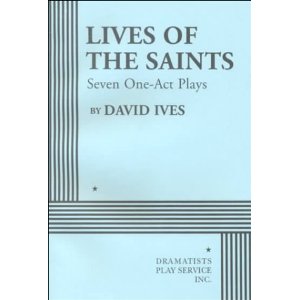 Link to read more about the playwright on Wiki...
http://en.wikipedia.org/wiki/David_Ives

Link to a rare interview of sorts as the playwright answers questions during the plays world premiere - on Playbill.com "David Ives Discusses His Lives in Rare Philadelphia Q&A" Feb 1999...
http://www.playbill.com/features/article/64862-David-Ives-Discusses-His-Lives-in-Rare-Philadelphia-QA (note: my fav line... "...Soap Opera recounts the love affair between a repairman and his washing machine -- a hot-and-cold relationship, you might say."

photo credit: from playbill.com
(note: think he's looking better here in black & white than in his color photo below...)

Link to Zoetrope All-Story blurb about the playwright - David Ives - & a link to his article "Why Write for Theatre?" in Vol 4 No 4...
http://www.all-story.com/search.cgi?action=show_author&author_id=79
(note: is it me, but I like to know Why People Write...so of course I like to read...) 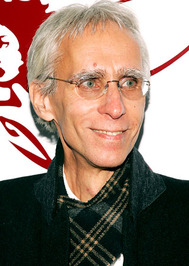 photo credit: from GoodReads.com
an exerpt by David Ives...

Link to The Ind article "Lives of the Saints Coming in January" by Anna Purdy...
http://www.theind.com/arts-a-entertainment/86-aae/9651-lives-of-the-saints-performance-in-january
(note: it was here that it was mentioned - there would be an Opening Night Dinner & Theatre with Bonnie Bell, as the restaurant sponsor & at Closing Night there would be Dessert & Theatre with Carpe Diem Gelato-Espresso Bar as another sponsor...my goodness such Yummy sponsors & neighbors downtown to have too?!)

Link to our local The Advertiser article about the play...
http://www.theadvertiser.com/article/20120119/ACADIANA/120119003/Acting-Unlimited-Inc-presents-David-Ives-Lives-of-the-Saints

Link to where it was available on EventBrite.com...
http://lives.eventbrite.com/
Link to where it was also availabe on Zvents.com...
http://www.zvents.com/z/lafayette_la/aui-presents-david-ives-lives-of-the-saints--events--233302465
(note: Now I'm torn on which online event/'vent place to go for tickets if I just don't drive down there...It looks as if they both just copied the postcard/handout - except someone at EventBrite & also at Zvents - curious that - mispelled 'wee' as 'twee' so that was kinda of comic to go along with all the rest of the fun...best go back & check my spelling now or I'll be adding to even more besides the point fun...And I just went to buy a ticket during the day as I was running downtown for AcA volunteering & just happened by next door for an espresso at Carpe Diem Gelato-Espresso Bar...yeah--just happened, that's right...)

Link to a May of last year review, now that was obvious--by the month alone...after the Feb review above...succinctly just called "Theatre Review" by Roy Giles...
http://www.arcadiamagazine.org/lives-of-the-saints-by-david-ives-ghostlight-theatre.html
(note: here he's repeated some of the fun lines in the one-act Soap Opera, between the washing machine goddess or 'White' - I didn't catch her name in the play - & the repairman...)

Link to article in Uncovering Oklahoma - Lives of the Saints Q&A - only this time with a director from Ghostlight Theatre Club's production of  The Lives of the Saints...
http://www.uncoveringoklahoma.com/2011/05/lives-of-the-saints-qa/
(note: I especially liked the photos included--it was interesting to see the 'boulder' for Babel's in Arms was a huge chunk of styrofoam in their version & the stoneman a woman...Oh the fun to produce a play?!)

Link to Berkshire on Stage - Mill City Productions staging of 4 of David Ives One-Act plays - one of which is The Lives of the Saints & a photo of him/the playwright - like their play of  words too: "Four One Act Plays--The Ives Have It"...
http://berkshireonstage.com/2010/08/06/mill-city-productions-to-stage-four-one-act-plays-by-david-ives/
(note: at the bottom, something else blew me away--the Cisco ad/vid for their Unified Data Center...I love it--the motion/the words/the music/the digital stream looking like water drops...all of this & more, it must of won a prize--it's a Winner?! but then I have ADDY's on my mind of late, here in Lafayette, now I find myself wanting to know more of Who Created This Thing of Beautiful Advertising - again, I may repeat, it's why I wanted to major in Marketing to get to Advertising to be anywhere near Creators of stuff like 'This' ad?! Link to where you can watch too... from Twitter: bit.ly/yCR4IR or find it on YouTube - am having trouble finding that link, so later, since it's beside the point... )