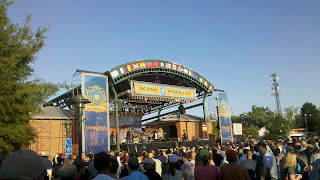 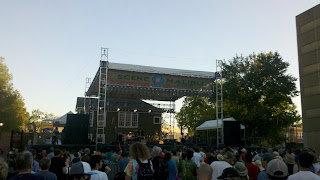 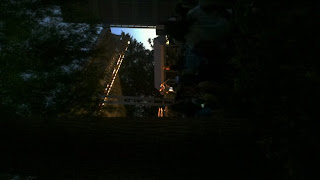 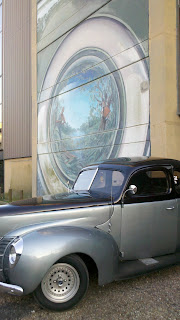 Classic auto parked in front of the auto mural - downtown Lafayette
(how perfect a coincidence was that - and too that I walked by just then?!) 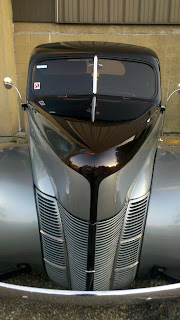 Name that Classic Car? I can't, can you?!
(what do I know about antique cars, I just know I like these sleek sports car lines & in front of the automobile mural--even better) 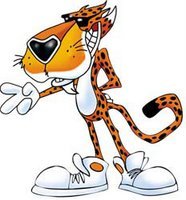 ﻿
﻿
But what comes to my mind is a sleek black Cheetos Cheetah nose...
(Oh my what adverts have done to me from a very young age) 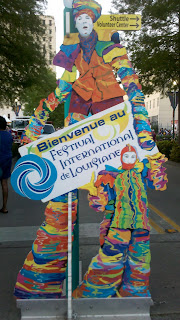 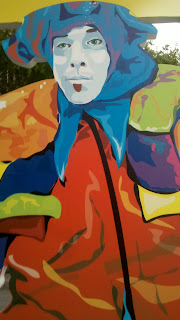 These colorful clownish stiltwalkers will be in the Festival Parade -
they have every year the La Promenade
(note: took a video of the parade, but so quick & so short a lineup & such a wandering of the streets that it was so very much better live than what I happen to catch, will still post separately or you can look on their official webpage for the festival to see more photos & more, perhaps better, videos too...)
Day Three - Friday Day/Night 4/29/11 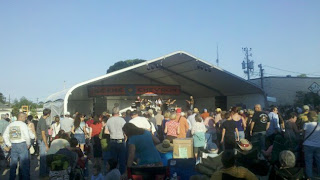 Steve Riley & The Mamou Playboys - Louisiana Cajun - Scene Chevron
(note: I think Scene Chevron was the local/Cajun stage it felt like, still dancing up front going on at all the stages, you can Cajun 2-step to just about anything I'm guessing?!) 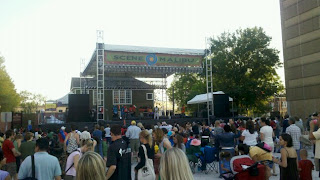 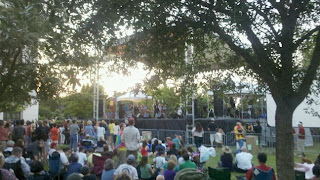 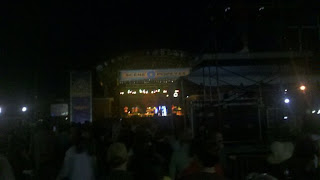 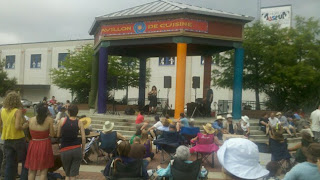 Lisa LeBlanc - New Brunswick, Canada - Singer/Songwriter -
Black guitar at Pavillion de Cuisine/FoodCourt Pavillion
(note: she was very proud of her sundress & sunburn, since back in Canada there was prob. snow still?!)
Master Drummers of Burundi - Burundi, Africa - Traditional/Percussion - Scene TV5Monde
(note: they were on stage & in the parade too, you could buy big/medium/little drums at the Market tents nearby - I'm sure a lot of kids, big & small, went home with drums this year?!) 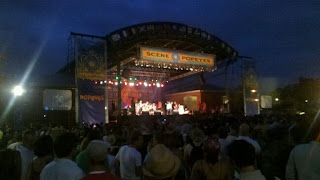 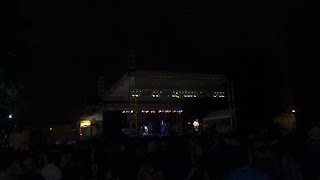 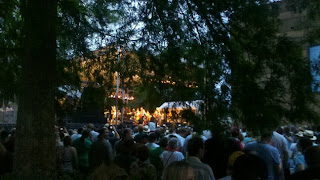 March Fourth Marching Band - US Circus/Vaudeville - Scene Malibu
(note: they've been to Vegas Baby & you can soon see why?!) 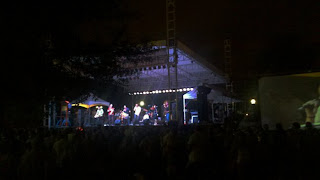 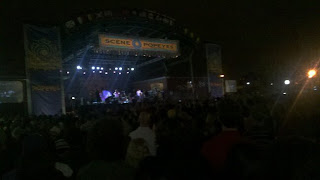 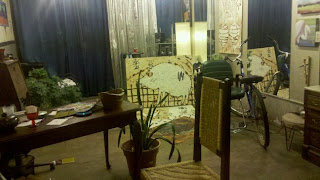 PitStop for a Pulled Pork Sandwich, next door to artzy/crafty gallery, closed, but what do I spy? A drawing of a pig, how appropo was that, while we waited for food, we could contemplate where that pulled pork came from?! hmmm...mmm...hmmm...
Day Five - Sunday Day 5/1/11
(May Day, May Queens, May Poles, May Baskets & Music?!) 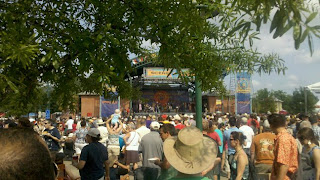 March Fourth Marching Band - US Circus/Vaudeville - Scene Popeye
in their fullout daytime spectacular 17 band member or stiltwearing crew
(note: there are YouTubes, I took a video too, see separate post - they have a webpage - I bought their CD, missed the signing times - sent one to the Navy boy too, who use to play the trumpet...if he coulda only been at the right place at the right time back when after Band practice?!)
Scene Chevron - passed by (exhausted after a week of Int'l Fest so going off to find the car parked way/Way far away) - Chubby Carrier & the Bayou Swamp Band, as they were mentioning a crew there was filming them for their documentary (later I would hear they asked people to come up on stage & at least one big bottom girl went up, no surprise there...) Look for the documentary, my friends will be in the crowd?! - Louisiana Zydeco (Grammy Winner & told the last year for Zydeco & also that it's happened before, back again to just Cajun I suppose...) 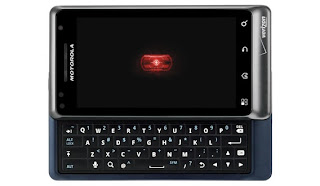 Note: followed schedule 2011 on my Droid Phone App (new this year, what timing for me?!) - came in very handy wandering from stage to stage & past the food tents or Market tents or following the parade or where ever else downtown Lafayette...
Big Thank You to Seed Labs LLC - Austin, TX ( http://www.seedlabs.com/ ) who apparently orchestrated that Droid Phone App this Year?! It was awesome & I used it a lot, I would of been lost a lot of the time if I didn't have it to see where I was going & when & to see who too?! (& OK, there was an iPhone App also)
http://www.festivalinternational.com/site309.php
You can follow them on Twitter & Facebook too, of course...
Twitter: #festivalintl
Facebook Page: http://www.facebook.com/festivalinternational?v=info
You can shop online or at the Festival - it's a Free Festival, so supported if you shop for food or drinks or souvenirs or if you're a vendor or a sponsor or whatever else that doesn't involve me buying a ticket to see each band... http://shop.festivalinternational.com/
At their CD shop inside their tent near Scene Malibu, was told all the Artists receive all the proceeds from the sale of their CD's - plus had a plaform cubby with table/chairs set up for the Artists to come sign their CD's, but I missed the ones I bought (I mean really how is a 17 plus marching band gonna come sign my 2 little CD's, hmmm...)
Link to Official Festival Page...
http://www.festivalinternational.com/site.php 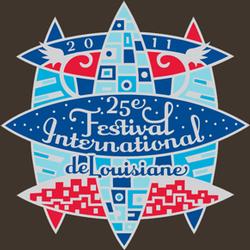 Link to Louisiana Tourist Page...
http://www.louisianatravel.com/
"Louisiana Pick Your Passion"
﻿
Posted by Sharon In A Volvo at 1:42 PM