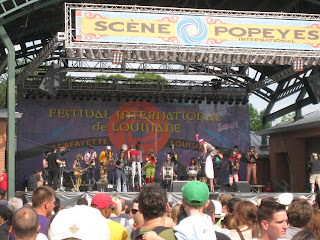 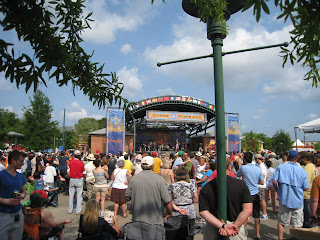 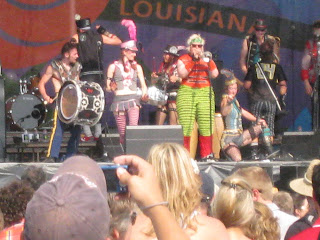 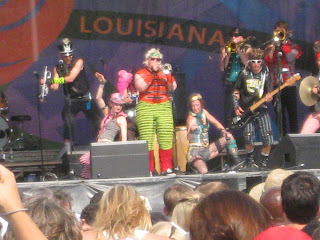 More street entertainer stiltwalkers, from the painted sign, the colorful ones... 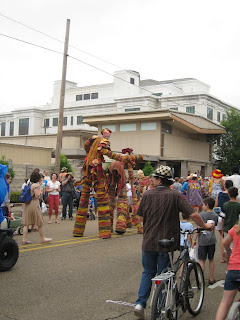 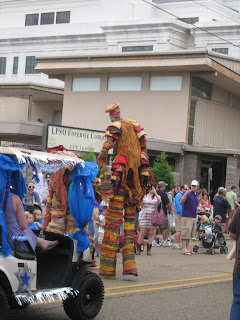 Link to Stiltwalkers - on official Int'l Fest webpage, with write up & their photo/webpage...

(France - Stiltwalkers)
Three timeless creatures are strolling about in the streets. The first one, standing up, is more than three meters high and is scanning the horizon of this weird world. The second one, smaller, is moving on all fours and exchange knowing glances. The third one is moving about on the ground and meets the people with its delicate fingers. One line, moving peacefully at a walk, they discover the cars, the shops, the people. Gradually, these three characters reveal their own small world; pinching, caresses, hide and seek games…ambulatory show wordless and without music.
http://lineup.festivalinternational.com/band/tetes-en-lair-stiltwalkers 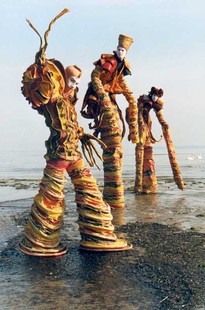 Stiltwalkers Webpage: http://saupalin.free.fr/parade.html
(note: to see them in motion is a wonder, children are at an instant amazed, curious & yet cautious - but they just plain make me smile...Oh my if I'd seen such things when I was a child?!)

(at first w/o their drums, as the arrived at the end they were brought their drums - but we didn't walk that fast to photograph them, only heard them...but do have another video of them playing at the Scene TV5Monde) 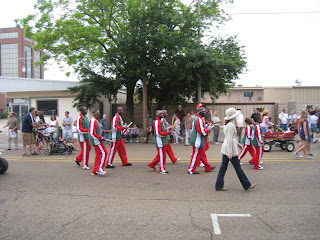 
(note: can't seem to load up my video, again, so there's the official webpage & YouTube to listen or watch them at instead...) 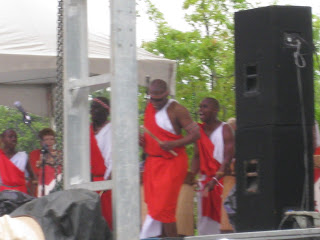 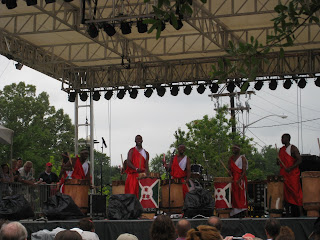 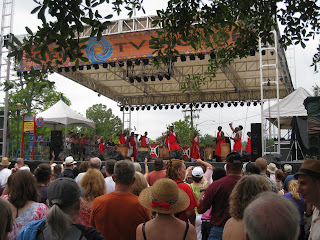 Link to Master Drummers of Burundi - on official Int'l Fest webpage, with write up & video...

Burundi - Traditional Percussion
Remesha Drums is a percussion ensemble originally from Burundi, Africa, now based in Ottawa since 2001. The members of Remesha drums have been playing Ingoma (Drums) since they were young boys. Traditionally drummers like Remesha are a part of ceremonies such as birth, Umuganuro (sorghum harvest) and coronation of the Mwami (Kings). The drums are made from hollowed tree trunks covered with cow's skins. Drums called Karyenda are sacred in Burundi, and represent the Mwami fertility and regeneration.
http://lineup.festivalinternational.com/band/burundi-drummers