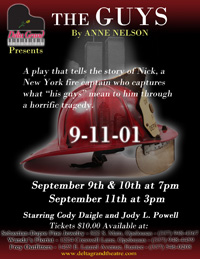 (note: made it to this one, but just a bit late - as was using the new GPS & don't know Opelousas - ended up then sitting up under the balcony next to the guys filming so a perfect viewing spot in the Delta Grand Theatre...also thankfully in the dark, so I could cry at least 3 if not 4 times & once back in my car too - you hurt for a lot of folks, we were away from our country back then so I think I hurt for the country still from 10 yrs ago...)

“The Guys” tells the story of Nick, a New York City fire captain who has lost many men in the terrorist attacks on the World Trade Center. He comes to see Joan, a writer, so that she can help him write eulogies for his fallen men. As the two characters talk about the dead firefighters, Nick opens up and they create testimonies to these men.
This is a very moving work of drama. Although rooted in the events of 9/11, the play touches on issues that transcend that specific historical moment; it’s about the place of a writer in society and about the potential power of words as healing tools. It’s also about how extraordinary events impact ordinary people 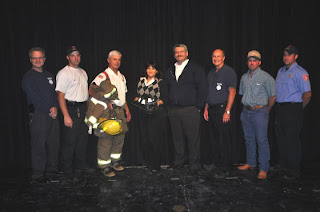 *I've met this guy, Cody (4th from the left in the photo) & have seen/enjoyed a number of his plays performed in Lafayette, esp at Cite des Arts, but have never seen him act--yet, but this afternoon for the last performance, in honor of the 10 Year Anniv of 9-11 am planning on attending...my bro in law use to be a volunteer fireman, but not anymore, & thankfully not ever in NYC & not in 2001?! And I hear too it will be the last time we'll see Cody in a 'stache - tomorrow he's back to his beard?! 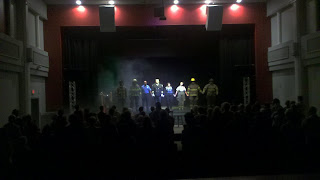 photo credit: finally--me, at the end, smoke still in the background, real local firemen in the line up, Cody/Nick in his captain uniform somewhat center, Jody Powell/Joan to the right & I had forgotten there's a woman in firefighter's gear too next to her - didn't get to hear her story (am thinking now if they did all 8 'guys' who were lost for real that day in this play then I only heard 3 of them coming in late, that leaves 5 earlier that I would of missed & could be 1 was a woman? or she's local? or she's a surviving wife or daughter or ?? I may have to read the book yet to find out more & perhaps before next year...)

note: returning from the play & writing...It was indeed a moving show, Cody as Nick had a major part & filled the captains/the fireman's shoes & his uniform well, even with an added New York accent...He can act, he is not just fluff & now I know he can do more than direct a play he can be in one as well, very well...And really I don't know how he could say his lines in this play, I would of lost it after talking about the first on his 'guys' at the firehouse that was lost that day in the Twin Towers - it's when people start telling a particular person's story on that day I can't not get choked up...

At the end of the play you found out there were real firemen in the last lineup of firemen on stage - so some of  "our guys" or local guys/the real firemen were mentioned as they stood on the stage with the actors & since I missed the beginning of the play I don't know if anyone knew a firemen or a first responder lost on 9-11 which they might have announced at the start...

As Nick/Cody says in one line during the play...we watched the video at the firestation...you see them just walk away, they just walked away...then Nick/Cody walks away off stage & you're left quietly thinking a moment...he's just walked away - what if right? What if you were the one to walk away to your job that day, to your plane, & you never walked back home again...

Now I'd like to get a copy of this play & be able to read it, read what I missed at the start & just to reread these 8 firefighter's stories & about the captain - a man of action - & the journalist - a woman of words - that helped him write his eulogies--that is of course with a whole box of tissues by my side... 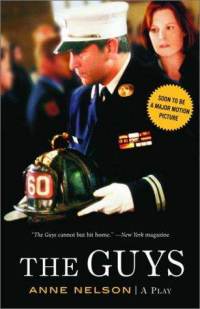 note: there is a book from the play, so must look for this next - here the photo of the cover...
For many it would be a cleansing - & am sure for some who've watched this play over the years - a healing experience...what an honor to be in such a play & how well they did honor these particular firemen as well as all the others lost/affected/left...forever remembered ox....

Link to the local theatre in Opelousas, LA...
http://www.deltagrandtheatre.com/theguys2011.html

The Guys is a play by Anne Nelson
about the aftereffects of the collapse of the World Trade Center.
In the play, Joan, an editor, helps Nick, an FDNY captain, prepare the eulogies for an unprecedented number of firefighters who died under his command that day.
The play debuted off-Broadway at The Flea Theater on December 4, 2001, directed by Jim Simpson and starring Sigourney Weaver and Bill Murray. (*see below in photo) 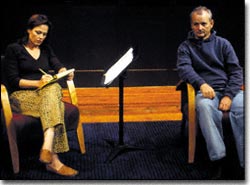 Since 2001, The Guys has been presented in 48 US states and in... (5 countries to date)
Tim Robbins & Susan Sarandon presented it at the Edinburgh Festival. 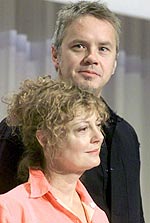 photo credit: from The Telegraph, article by Charles Spencer Aug, 2002
It enjoyed a commemorative rerun at the Flea Theater in 2006 on the 5th anniversary of 9/11...
They also star in a 2002 film adaptation, for which Weaver was nominated for a Golden Satellite Award...

Thank you Wikipedia for the breakdown, to the link...
http://en.wikipedia.org/wiki/The_Guys

"Tim Cummings as Nick in “The Guys,” Anne Nelson’s 9/11 play that opened in December 2001 with Bill Murray and Sigourney Weaver. It’s being re-mounted this year for the fifth anniversary of the attacks.

Five years later, still one of ‘The Guys’

...Not since being in The Guys have I remotely touched on how powerful theater can be. As it entertains you, causing you to laugh, to cry, to think, it has a restorative healing power, too. It’s true there are a million stories to be told about 9/11, and “The Guys” is only one of them…but it is the story that I know, and the story that I get to tell again this year at The Flea, for the 5-year commemorative re-mounting of Anne Nelson’s play. And going back to this work that made me a better person and a better actor is a rare opportunity."

photo credit: Tim Cummings as Nick in The Guys - 2006 article in The Villager
an excerpt from The Villager article link...
http://www.thevillager.com/villager_175/fiveyearslaterstill.html

Watch with at least 1 box of tissues
Posted by Sharon In A Volvo at 12:20 PM