Brother Simon could do standup

photo credit: www.gothicgarments.com
(note: as didn't have one of the actual Brother Simon in his tunic)

Who knew a Monk could be funny...

I lost track of how many times I giggled or covered my mouth not to full out laugh, during Brother Simon's talk today at AdFed's Lunch 'n Learn...

Wish I could remember some of them, as you'd be listening it would take you a delayed second to realize he'd come up with yet another 'zinger' & you'd think did he just say that? Did a monk just say something funny--Yes he did?!

Non-profits not a typically fun subject, but there's no doubt this Monk is not typical - he deff blows the preconceptions outta the water I'd say...

And I like what he'd done for the Abbey's logo & webpage & how he designed thank you cards for contributions (taking design ideas from De Wit curtains in the Abbey or Rectory) & even the afternoon's presentation to an Advertising group, of all things - in a room full of people eating lunch at round tables where he was standing at a podium to give his presentation, which am guessing he's not use to doing on a daily basis - but we did all smile/laugh/later asked questions of him...

As he said himself, as he took another drink of water, he was nervous having not spoken so much nor having seen so many people (when I was wondering somewhat if he also meant seen so many women too) in a long while - when they're not a silent Abbey but many hours are spent in prayers (did he say 5 hrs/times a day? which made me think of the Mosques with their calls to prayers...) And he also mentioned they eat in silence at the Dining Hall - so what a diff this day out was for him am sure...

Obstacles we think of in Abbey's/monastery's are not usually WiFi/Internet connections & print techniques or old camera's - for Brother Simon, also the Abbey's Communications Director, to at first try to do a modern day job of communications from ancient (if you can say early 1900's is ancient)/yet being remodeling facilities...

And besides a new artist I must look up, who painted in the Saint Joseph Abbey, I learned today about  rhythmic mode notes/inflective marks before the musical notes on 5 lines of today were made - or - they could be called breath notes--"neumes" (and you'll see them on Saint Joseph Abbey's webapge too, now you'll know what they are) They look like little square notes w/o a lot of tails down or strokes up...

a sample of  'neumes' or 'square notation'

I would of called this a chant, as in Gregorian Chant (which I have heard sung beautifully before inside the acoustics of an Abbey or Church....) Because of what the sounds are that come from reading words say in Latin in a song like way only by holding the breath longer on many a letter/note...

Oh my, now am remembering how I use to attend meditation classes at the Zen Center in Houston & they would have some ceremonies, we the public, could go to & attempt to 'sing' along - even with the words in front of me, often not in English, I couldn't sound like I was in harmony with anyone (it would take some practice I'm sure...)

Link to read more about neumes, if you're curious (like I always am...)
http://en.wikipedia.org/wiki/Neume 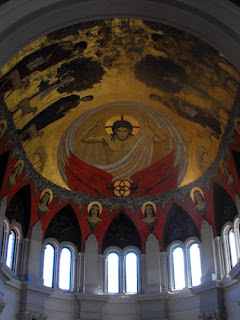 "Day visitors will enjoy tours of the Abbey Church and refectory, which were designated in 2007 as National Register of Historic Places properties. In 1946, Abbot Columban Thuis commissioned the Benedictine artist Dom Gregory de Wit to execute a series of original murals in these buildings. The Dutch monk lived and worked at Saint Joseph for 10 years as he painted the murals with mixtures that could withstand the humid climate. The magnificent results on the walls and ceilings have remained well-preserved and drawn lavish praise from critics and visitors alike."

Note: above text borrowed from AFF Acadiana webpage in their write up for the speaker...
Selling God: A Monk's Marketing Solution...

(note: check out their logo, like the walking ad board design guy in black/yellow...) 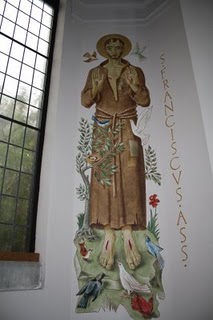 this is 'not' what I had in mind when I think of St Francis standing with the animals of the forest
but apparently this is what Dom Greogory de Wit thought - I can't seem to find many photos of the murals, surely there are postcards in the Abbey's giftshop...hmmm...

photo credit, taken in 2008 & found on this blogspot by I'm guessing a contemplative catholic who happened to visit the Saint Joseph Abbey & take these photos of a few select murals: http://contemplativecatholicspirituality.blogspot.com/2008/12/st-josephs-abbey.html 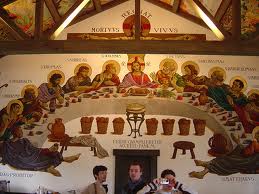 in the Rectory dining hall, the last supper mural by Dom Gregory de Wit - if not at one time the largest such mural of the last supper (with curious modern additions in it, as Brother Simon told us, water glasses or ashtrays?!)
photo credit: from www.peeepl.com (maybe this is like a Flickr page)


Artist Monk's Name: should be spelled De Wit & not DeWitt (but if you do a search, it may be spelled both ways) - the prefix title 'Dom' is from the Latin word: Dominus, a sign of respect (the feminine is Dame) & other languages could use Don & Dona * 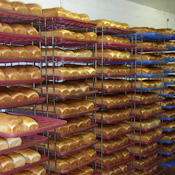 1 of their 5 apostolates...Pennies for Bread

the monks bake bread then take it to NOLA to distribute to a center that gives food to the poor & needy - after Hurricane Katrina I can only imagine how that must of been needed, possibly a reminder of the Bread Lines from back in the Depression Years if anyone had taken photos of the lineup (that was a time my Granny use to recall for us, her Grandkids - this from a Granny who got an orange for Christmas in her sock hung up on the fireplace & that was a big deal...)

Another of their 5 apostolate*s is Woodworking - where they had started making caskets, only to find out there was some obscure law on the books that supposedly only funeral homes could sell them...we'll be waiting to find out about this latest odd court ruling, as it's gone to legal action - can you imagine telling a church/monks they can't make/sell caskets for their dead parisheners/families, boggles my mind...(I thought all the crazy Blue Laws & such were done with in LA, but apparently there are a few leftover we don't know about - caskets being one of them?!)

*which I don't recall hearing that term before either - so my new word for the day after 'neumes' is 'apostolate', which basically in a community like this would be doing the work of the church... 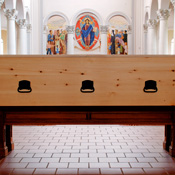 Woodworking
(note: drawing gift for the day, was a monkmade wooden box - no, not a mini casket either - with a handcrafted soap inside, the soap making is a new venture the Abbey monks are taking on so folks can look for more to come from that idea soon...)

A link to an article about this court battle...
http://www.nola.com/crime/index.ssf/2010/08/st_joseph_abbey_battles_state.html

And one more link - someone asked in a nutshell if bad publicity was not also good publicity at times, or in this case then the Abbey/Monks/Woodworking/Caskets/Fundraising all came to the public awareness in the media/court debate...
http://veracitystew.com/2010/08/29/casket-making-monks-vs-louisiana-funeral-assoc/

Under the Christian Life Center--they offer retreats out in Covington, LA...even art retreats (am hoping not just Icons) - would I love to go to the woods/gardens/cemetery with a camera or inside the Abbey to take photos of the DeWit paintings to start - or to sit in a room to write in total peace & quiet...no matter the Faith you can go as a group of up to 40 & stay in the modern rooms with meals, or at least the 1 photo of a room online reminds me of modern if not somewhat Scandinavian type furniture (remembering I just moved back from Stavanger, Norway...)

Sept 30 - Oct 1st the next retreat date on their online schedule...

Waiting for a 'Deo Gratis' in Lafayette now to laugh with the monks, or at least Brother Simon - but so far there are only fundraiser parties going on in NOLA & BR...

from Wiki about the Abbey...

St. Joseph Abbey is known for its Abbey Church. It is a fairly large building built in the Romanesque style. In 1946 the Abbot of the monastery, Abbot Columbian, commissioned Dom Gregory De Wit, a very talented Benedictine artist, to fill the abbey church, monastery, and monastery refractory with beautiful murals. These murals depict saints, stories from the Bible, God's creation, and stories from the life of St. Benedict. De Wit was able to come up with a mixture of paint that would withstand the harsh humidity of South Louisiana. Many visitors have traveled to the Abbey just to see these remarkable paintings.

However, this is not the only thing that draws visitors to the Abbey Church. In the early 2000s St. Joseph became a proud owner of a Dobson Pipe Organ opus 2000. This organ has become very well known. Many accomplished musicians have traveled to St. Joseph to play this organ and record many musical albums. This organ was also privileged to be the cover picture of the April 2001 edition of The American Organist magazine  The world renowned Fr. Sean Duggan, a monk of St. Joseph Abbey who teaches piano and organ at the University of New York, is well known for his playing of this organ...

(note: there was no mention of the pipe organ in today's talk, but now am curious to hear it...but then it doesn't take much for me to be curious?!) 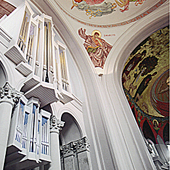 A link to a photo gallery starting from the Spring of 2005 - I especially liked seeing the white peacocks (not sure I've ever seen a white one before, as many zoos/gardens/grounds/countries I've been to-it's usually the regular colorful ones I've seen/heard & on at least one occasion have tried to take a video of them spreading their tail feathers...)
http://www.pbase.com/septembermorn/st_joseph_abbey

*NOTE: Addition since Sept 11 - written up in Dec 11/Jan 12 ABiz by John Mikell:
Link to article " The Anti-Loren Scott: Brother Simon Stubbs, a monk at St. Joseph's Abbey in Covington, addresses AAF Acadiana on his career in 'Selling God.' "
http://abizlafayette.net/publication/index.php?i=&m=707&l=1&p=19&pre=&ver=swf

Lunch 'n Learn...I did learn something, a lot of somethings - so thank you AdFedAcadiana...
& esp to the 2 members who sent me Tweets last minute or I wouldn't have made it on time/if not early, because I thought it started at 11:30am not that it was pre-registration & 12:00pm was the start time - I'm never early, this was a first I think?! Well, you know who you are--again, thanks guys?! :oD
Posted by Sharon In A Volvo at 2:03 AM