A Night of New Firsts

First Night of Theatre 810 & First Play of The Compound & a New Play of Cody Daigle's...
but sadly I missed the First (Opening) Night & was there the Second Night...
close enough I'd say--still New, a Day Old Baby is still New in my book?! 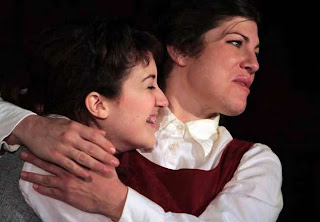 A New Play by Cody Daigle
Directed by Alicia Chaisson 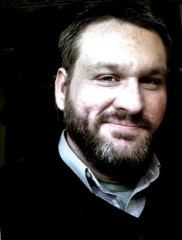 photo credit: from The Compound's webpage
a great photo of Cody Daigle, with his facial hair intact
(as you'll note previously in The Guys, he had to sans the beard for a 'stache only & now he's actually all bare faced again - until the beard grows back...Whew?! almost as bad as a woman & her haircuts... just kidding mind you, if he reads this or anyone that knows him--no offense y'all?!) 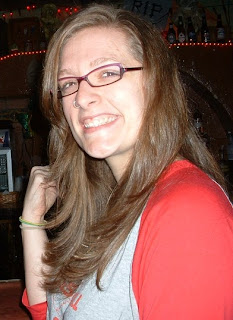 Director: Alicia Chaisson
photo credit: The Compound webpage
(note: I have not met Alicia yet, but am sure I will one day--if I continue to go to the Theatre 810 for the rest of their plays after this First New one of William & Judith...)

The Play: William & Judith's next stop--Tulsa, Oklahoma...
Since the play was developed/read at Playhouse Theatre in Tulsa, OK it will have it's World Premiere at the same theatre in Feb of next year, 2012...

Link to The Compound's webpage to read more about the new theatre collective (that's their description--collective) & the Play William & Judith with photos from the production, their first & a lot more about the actors & director & Well--just go over there & read more...
http://thecompoundtheatre.wordpress.com/

Description: (or I'd say Inspiration)

"Let me imagine, since the facts are so hard to come by, what would have happened had Shakespeare had a wonderfully gifted sister, called Judith, let us say...

She was adventurous, as imaginative, as agog to see the world as he was. But she was not sent to school. She had no chance of learning grammar and logic, let alone of reading Horace and Virgil.
She picked up a book now and then, one of her brother's perhaps, and read a few pages.
But then her parents came in and told her to mend the stockings or mind the stew and not moon about with books and papers...

Had she survived, whatever she had written would have been twisted and deformed, issuing from a strained and morbid imagination. And undoubtedly, I thought, looking at the shelf where there are no plays by women, her workd would have gone unsigned...

Anonymity runs in their blood."

-Virginia Woolf
"A Room of One's Own" 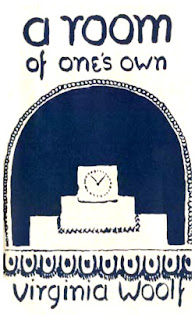 photo credit:
Source: http://www.english.sbc.edu/Graphics/Other/book.jpg
Article: A Room of One's Own

[In one section, Woolf invented a fictional character, Judith, "Shakespeare's sister," to illustrate that a woman with Shakespeare's gifts would have been denied the same opportunities to develop them because of the doors that were closed to women.

Judith is trapped in the home: "She was as adventurous, as imaginative, as agog to see the world as he was. But she was not sent to school."

Woolf's prose holds all the hopes of Judith Shakespeare against her brother's hopes in the first sentence, then abruptly curtails Judith's chances of fulfilling her promise with "but."

While William learns, Judith is chastised by her parents should she happen to pick up a book, as she is inevitably abandoning some household chore to which she could be attending.

Judith is betrothed, and when she does not want to marry, she is beaten and then shamed into marriage by her father.

While Shakespeare establishes himself, Judith is trapped by the confines of the expectations of women.

Judith kills herself, and her genius goes unexpressed, while Shakespeare lives on and establishes his legacy.

For Woolf, Judith Shakespeare is an exemplification of the danger and waste in denying women education and the means to determine the course of their lives.]

Note: although this version of Virginia Woolf may have been Cody Daigle's inspiration his version was nowhere near this dark, though not a complete Happy (Fairy Tale) Ending either...still it fit with how William Shakespeare would have ended a play?! 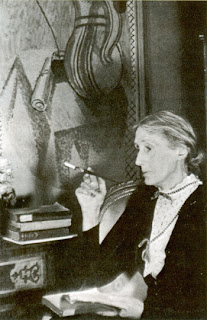 photo credit: unknown
found on someone's blog who did not give credit to the original source, so do I need to give credit to their blog? hmmm...dunno for sure, they're in France & does that matter...nevermind...I like the photo for another view of Virginia Woolf in a room, a much different one than the Monk's House Room - this one with her books & a cigarette in it's proper holder in front of a painting I don't know...again, nevermind...it's the feeling of this woman in this room different than the other--but still a Women in a Room of Her (One's) Own right?!

note: especially another black & white photo of her at the Univ of Sussex & Society of Authors at Monk's House...She looks as contemplative as a woman can be seated in possibly a Room of Her (One's) Own...

Note: Yes, they are right next door to Carpe Diem Gelato Espresso...could they have a better neighbor? Hello! Intermission--Espresso or Gelato or Pastries?!

And next door/across the side street from Carpe Diem Gelato Espresso is Bonnie Belle's Bistro - which on Closing Night there will be a Dinner & Theatre combination ticket being offered for an extraordinary price of only $30.00 (am sad I will miss it most likely, but I was there on their Second Night ever I can still tell the Grandkids?!)

...as I did leave the play thinking - and wanting to talk about the women's ideas in the play?!

I can well imagine this play - William & Judith - as a Women's Studies Course, along with naturally Virginia Woolf's "A Room of One's Own" being read along side it...

How Cody Daigle--Yes, a man...could channel these women characters & their words so incredibly well is a mystery to me...as I have also read books that were written by men about women or women about men who could so 'get into the characters' that it didn't matter which gender they were writing in--they just knew the character, the people, as if they were real flesh in blood standing in front of them living/breathing/speaking/moving... (maybe one day I will ask 'the' man--How Did You Do That?!)

But I'll admit too there were Women playing the Women's parts, so they must have had some input & there's a Woman Director (Alicia Chaisson) along with them so how could she not also have her input into these women as characters - whatever the combination between them all, it was wonderful to watch/hear unfold...

And though many of the posts on The Compound's webpage comment in reply for instance by actors/directors that the story is about 'a man' or about 'Shakespeare' - I felt the story of the Women (all of them: Judith, Jude & Anne Hathaway-Shakespeare) was so much stronger, Judith afterall gets equal billing with William in the Title of the Play...

It does also make you ponder, perhaps too many women already have, if  indeed 'back in the day' of the Victorian's or Virginia Woolf's or the Elizabethian's or the Shakespeare's that Women were behind more than we know...behind the Plays or the Books or whatever else that men lay claim to - that saying that goes something like: Behind every Successful Man Stands a Great Woman, is then not just an idle remark or a feminist rant either...(btw besides, again, I'm just 'pondering' - I am also not old enough to be a Militant Feminist / Femi-Nazi, so don't go there - thank you & good night?!)

And another ponderance (is that a word-it's sounding like mispelled Shakespeare maybe) is within the character of Jude, who is illiterate in the play & what's been written as in real life as well - though a daugher of a great & famous writer - she doesn't even desire to read...which makes me think of all the women as girls who were not encouraged to do anything besides "mend the shirts or stir the stew?!"

All in all it ALL makes me very/Very/VERY grateful for living in the time that I am in right now & especially for being raised by a strong woman - my Grandmother - who told my sister & I that we could be anything we wanted to be & that we 'would' be going to college as well....my British friend's right about now would be saying "Bless Her" & I would have to agree?!
Posted by Sharon In A Volvo at 12:57 AM