Danish, Swedish, German or Czech while I'm reading subtitles in English
and still I loved it as a historical drama/foreign film, about a time/part of the world I knew very little about...all the court costume, daily life, intrigue - not to mention details in the streets, mud/rats on the curb as the royal carriage rides by kind of thing...you cannot imagine how you can have empathy for anyone behind castle walls, but you do/you will... Official Movie Webpage...
http://www.magpictures.com/aroyalaffair/
4 yrs in the making? who can afford to do that?!
Good thing they're up for Golden Globe/Oscar as Best Foreign Language Film
as well as being previously at the Berlin Int'l Film Fest... 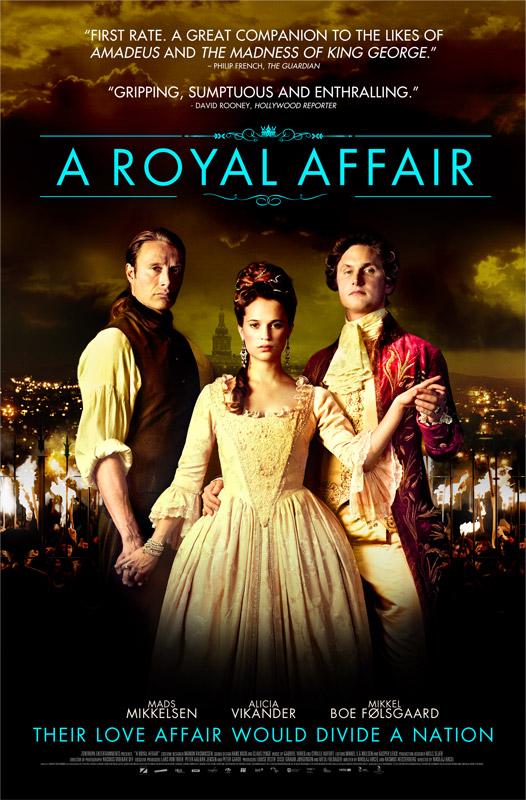 
"ROYAL AFFAIR is an 18th century historical drama four years in the making, starring Mads Mikkelsen and Alicia Vikander. Directed by Nikolaj Arcel, screenwriter of The Girl With the Dragon Tattoo, the film is an epic romance about the love triangle between a German doctor, the queen of Denmark, and her deranged king. The film was produced by Louise Vesth, Meta Louise Foldager (Melancholia) and Sisse Graum Jørgensen (In a Better World) for Zentropa Entertainments."


Wiki Link...
http://en.wikipedia.org/wiki/A_Royal_Affair
I guess they've had at least 4 yrs to work on a Wiki entry or two...

YouTube - DP/30 @ TIFF - Interview Director/Co-Writer...
http://youtu.be/gJVjioCfiZw
Toronto Int'l Film Fest
33 min's so you have to be really interested in this

from Cane Fire Film Facebook page - link to a YouTube of CGI work in A Royal Affair...
http://youtu.be/yAFnsJUEPHo

"Postscript for A ROYAL AFFAIR - Check out the CGI work, that I'm sure you didn't know you were seeing.....In Danish, but just watch the visuals!"

Link to the dance scene between the Queen & her King's Doctor in A Royal Affair...
http://youtu.be/8Cm1f5EAjl4
if I were British I suppose I might call this clip or this whole entire movie: Lush - to hear it's not a big budget film, it's lovely what they did with what they had...in this clip it also doesn't much matter it's not subtitled, or not to me after having watched the movie once on the big screen (or so far...)

so far it's been a Nominee for a Golden Globe & an Oscar for Best Foreign Language Film - Winner of a Satellite Award for Best Costume...


A review of A Royal Affair - by AO Scott - NYTimes...
http://movies.nytimes.com/movie/457047/A-Royal-Affair/overview
if one more person writes it's also a "bodice-ripper" I'm going to demand it be a phrase to go on the Word Ban List?!

A Royal Affair is a lavish and sumptuous costume drama with a juicy story to back it up.

And what Blu-Ray has to say about A Royal Affair in Blu-Ray...
http://www.blu-ray.com/movies/A-Royal-Affair-Blu-ray/52214/

annoyed note:
Nowhere does it mention, until you're up at the desk trying to pay for a ticket right before the show that they Only Take Cash - if you didn't happen to notice there was no card machine on the table...so you have to go back to the parking lot, get in your car, pull up Navigator on your smarty - thankfully - cell phone to tell you how to get to an ATM/Bank Machine & pronto - or would that be Touts Suite - so you can like Not Miss the One & Only Showing of this Foreign Film in town...

Whew--I made it just by the hair on my chinny chin chin...after watching it Before the Golden Globes I realize how very lucky I am that I got to see it on the big screen at all--because we'll see if, as a foreign film, (winner or not) it will return to little ole' Lafayette, Louisiana...Oh, I did mention my annoyance (& have e-mailed the LITE Center's Events & Tours to ask someone to kindly add a Cash Only note) at having to do all that in order to pay at the table getting my ticket just in time & not knowing it was a Cash Only operation until I got there (which may or may not continue to be how business will be done in future...but Now I Know to have enough Cash?!)