Cinema on the Bayou

Cinema on the Bayou 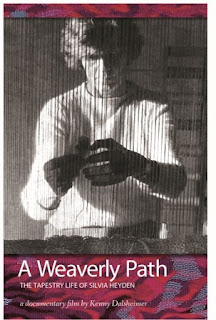 Link to webpage for the film...
http://aweaverlypath.com/the-film/

These things I know from watching this documentary film...

~ She hears colors (don't know if she's a synesthete or not, this was not mentioned in the film)
Link to what that is if you don't know... http://en.wikipedia.org/wiki/Synesthesia (thanks Wiki?!)

~ She's said she has an 'eye in every finger' - I love that she said that & by now with her fingers on the yarn in the loom she probably does, you know--kinda sorta fashion & not a horror movie image...

~ She's done at least 2 commissions (those shown in the movie, but from Flickr pics looks like there were more) where she's listened to musical compositions & made a tapestry according--in motion/in colors (I can't find the 2 composers, yet, think 1 was Bach...then I read she plays the violin, yet I didn't see that in the film--but as a volunteer I didn't get to see it all...)

~ She's studied in the Bauhaus tradition at  - I read - the School of Arts in Zurich (where I've stopped off for a day/night before, getting off a train, was going on to Interlaken at the time...)

More pics of her tapestries...
http://www.annatextiles.ch/artists/artindex/silvia/silvia.htm
(note: one titled orchestra & multi rhythms that again involve music...)
Posted by Sharon In A Volvo at 1:32 AM