I found out about it all late in the game, like during the Friday evening Panel talk at AcA about Writing - from Writers of Original Works (it says that last part on the schedule I picked up later...) all I knew was that Cody Daigle was leading the Writing Workshop before it...or knowing a bit more that I wasn't quite good enough for that discussion but I could listen in on a panel about writing after it...held my breath too during it when someone mentioned finding hidden writers & getting them to come out with their stories kind of thing, saying surely we knew someone who was like that or someone who would write & then only shared it with family or close friends...hmmm...must ponder that idea a bit longer--until then, on to the Friday evening play at Cite des Arts which I was lucky enough to find out about at the end of the Writing Panel (where sadly I couldn't say who was who, but I well know from them talking around the circle that they are indeed the Who's Who of Acadiana Theatre...) 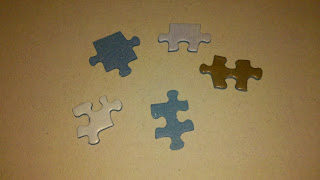 Puzzle of a 'Match'
a play by marc chun
directed by elsa dimitriadis
a wanderlust theatre company regional premiere...

plus along with the puzzle of what/whom was the Match in the play there was the sideline puzzle of who was that man in the chair on the far left - read the name on the program & knew I knew it from somewhere so I went to lookle it up & sure enough on the Staff at the AcA was his name & of all things I've talked to him many times behind the counter at the information desk at Aca...but in a hat, in a chair, playing this character I just didn't know him as him (later I would get the chance to tell him so when I volunteered at the AcA for the next event...)

what gave it away as a puzzle, at first, was looking down at the cover of the program & seeing an outline of a puzzle piece, so I knew there was some puzzling to be played...with the single word title, Match, you just know there is a 1 to 1 match of some sorts along the way...only there are 5 chairs, with 5 characters in it so that not being an even number you also know that it's not necessarily couples being matched up either...

so there was the puzzle idea going on in my head at first, until the lights were out & you could tell the actors/characters were seated & they began to speak, one after another in different sequences--not necessarily right to left or left to right or even gender wise male to female either...it was in essence spoken poetry...and I like it, a lot...at first I didn't pay attention to the words, but just the sounds of them going back & forth thru the room in the dark - then the lights came up, only they continued...

after the poetic/musical almost beginning came the back & forth, little snippets of conversations, one person then another, each seated in chairs & talking into the air, not to each other, not getting up to address anyone directly, but they were in the end or as you started to figure it out being directed at a certain other someone in the lineup...

bascially there is a day of blue sky, 'that' blue sky, that begins it all...slowly you start to learn the rest of their stories & how they connect like puzzle pieces, until toward the end when you can about guess whose path crossed another on this blue day...a lot rang true on this day, in their conversations & I liked that, it made my mind work a bit harder or differently than usual at the theatre, so that was a nice surprise...

should I tell the rest of the puzzling/matching story? am not sure I should--in case you get to see a performance & then you can puzzle it all out for yourselves...I enjoy puzzles, not too much the over the top without edges or extra pieces kind of ones but your basic say 1,000 piece puzzle...

Actors listed in the program...

and perhaps this is how they sat in their chairs, taking note, that #3 chair was higher than all the rest on either side of him...

A note from the director...

Match is a play that we have wanted to produce for several years.
When we decided that it was finally time, I had trouble finding information to secure the rights.
I googled everything that I could think of and finally took the chance that the only Marc Chun that came up was the same as my mysterious playwright.
I e-mailed a total stranger and got lucky--it was Marc Chun, Dr. Marc Chun, to be more specific, a scientist whose research specializes in sociology and education.
And he was warm and lovely.
His accessibility to us has been without measure and for that, I am grateful.

An important part of Wanderlust's mission is to explore dramatic and performance theories through our projects.
I was initially attracted to Match because it seemed to me to be a chamber music piece - where a small group of instruments, Goethe said, were 'conversing.'
Perhaps more importantly and as applied to drama, it is a brilliant intersection of parallel and panoramic storytelling.
Parallel storytelling allows multiple characters to develop their stories simultaneously and the panoramic form ultimately creates a master narrative from seemingly unrelated characters.
This piece does both.

Throughout our process, the cast and I have kept a T.S. Eliot quote at the forefront:

"We shall not cease from exploration and the end of all our exploring will be to arrive where we started an know the place for the first time."

It seemed to apply to the play and our journey both.
My hope is that this evening you will leave the theatre realizing that you too arrived where you began, seeing it with fresh eyes.

my note: Match is his 1st play - a 1 Act play - & he's from the San Francisco Bay area, the play was first produced in 2001...now here in 2011 it shows up at the First Hub City Theatre/Storytelling Festival at Cite' des Arts in little ole' Lafayette, LA?!

Link to a review of the play in 2007 (possible 'spoiler alert' if you read it...)
http://www.tuftsdaily.com/arts/theater-review-match-delivers-despite-its-dangerously-avant-garde-style-1.592087

Another note on the program was about the music played pre/post play...

Link to Wanderlust Theatre...
www.wanderlusttheatre.com
"wander with us"

Link to Acadiana Theatre blog...
Marie received 1 of 2 only awards from the organizers of this year's First Hub City Theatre/ Storytelling Festival, but she was not at the Cite' des Arts to receive her service award in person...
http://acadianatheatrehappenings.blogspot.com/
(note: now of all the days I find the blog, she's written on it that she's taking a break from blogging for a long while...what timing?!)

Link to article in The Ind by Anna Purdy...
http://www.theind.com/arts-a-entertainment/86-aae/9476-hub-city-theatre-fest-begins-dec-7


Portrait of an Artist as Santa Claus
by Ken Waldman

out of Santa's bag I received these gifts... 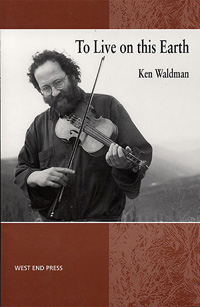 To Live on this Earth - book 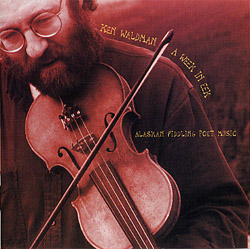 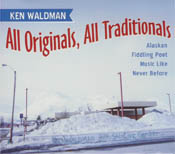 All Originals, All Traditionals - double CD 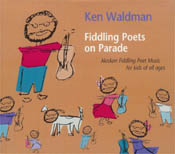 Fiddling Poets on Parade - for kids - CD
(given I think mostly because I have 2 G-Baby girls to share it with...also love the doodle art guy & that Ken's doodle drawn face is on the whole family/class/parade, especially the pet/doggie included...lol?!) 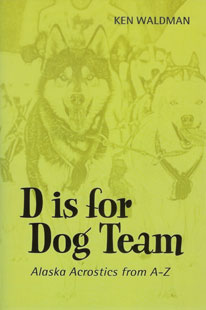 note: to be given to my now grown kid's old Elem School library
so they can enjoy not just Alaska or poetry or fiddling--but to enjoy reading/hearing 'Acrostics'
after I found out what they were I realized I knew what they were but just not what they were officially called?!

Link to Wiki about Acrostic (if you're curious too...)
http://en.wikipedia.org/wiki/Acrostic

Link to an organization that I guess likes to play with Acrostics Puzzles...
http://www.acrostics.org/

Another gift Santa Waldman gave us, was the first Acrostic printed on a yellow stock card from his Book: D is for Dog Team...

A is for Alaska

A state so much
larger than any other.
A state that makes you dream.
Short summers, but long days
keep going and going
and going past midnight

note: so you can see the puzzle/the poem of an Acrostic is that the first letter (in this case) from the poem spells what you are writing about...it could - & I didn't know this - also be the first word or first syllable...but read the Wiki, it does a better 'what it is' than I do...

End of the gifts lists...until I actually have time to read them/listen to them...

Keep an eye out/ear open--he may yet return to Louisiana, if not to Lafayette then he has a fondness for Breaux Bridge too (as he lived there for 3 months, at least - if I heard him right - & there is a lot of that time spent in his CD's & his books & in his artist friends that join him along the way too...) He also has a fondness for Austin, TX - so that's not far off, if you want to see him/hear him there too...

All I've left to say is Thank You Santa Artist--aka Ken Waldman, Thank You Hub City Theatre/Storytelling Festival organizers for bringing him here, Thank You AcA for allowing them/him your theatre & to top that off Thank You Shana for taking me as a Volunteer to tear tickets & usher...or I would of never met 'an Artist as Santa Claus' & gotten all my lovely, interesting, yet to be read/listened to or given away gifts?! What a great holiday season this has been & it's not even Christmas Day yet?! 'Tis the season for giving?! Jingle, jingle...