In the beginning there were 13 Episodes
now there are none
we the followers await Season 2
until then
there are:

articles
interviews
youtube
music - OK, a song
photos of cast as they are in real life
a book & a real author, a real Piper

so even in lil ol' Lafayette, LA
on Facebook
a local comment: (in so many words) I watched #OITNB & I hate TV Series--they End
I feel their frustration
tho they claim they will not be watching S2
uh huh, we'll see how that goes comes next year when it's back again on NetFlix TV
(it's a hard habit to kick?!)
on Twitter
a local comment: #OITNB is not American Pie...
I have never watched American Pie, other than a TV trailer
I only knew the fiance looked familiar from some movie or another
after that the only character/actor I recognized was - of course - Captain Janeway (StarTrek--duh)
and Whoa--can she play Russian Red or What?!
OK, so there is 1 more character/actor I know--That 70's Show, Girl Next Door
again Whoa--can she play Drug/Lesbos Queen or What?!

after...Red on Orange is the New Black

after...Alex - Orange is the New Black (you know what I said earlier)


This is not a review
I will for my own satisfaction just list everything I am interested in/blown away by in this Netflix TV Series
this after I was sooo disappointed in Netflix Movies, streaming or otherwise, that I was out picking up movies from RedBoxes all over town instead
now I've been sucked back in
this from someone who does not like TV, nor TV series
(Alright except Downton Abbey/Christmas shows or the weather channel when I have to due to say hurricanes or tornadoes...and on Netflix, again,--Lilyhammer, mostly because I lived in Stavanger, Norway for years so I could relate to the Norwegian parts - and - it also made me giggle with my hand over my mouth, like I wasn't)

NetFlix TV - Orange is the New Black...
http://movies.netflix.com/WiMovie/Orange_Is_the_New_Black/70242311?mqso=81003328
(note: there are summaries here of each episode...to start off easing those withdrawals)

In Withdrawals where else to go...

Amazon.com to order the book: 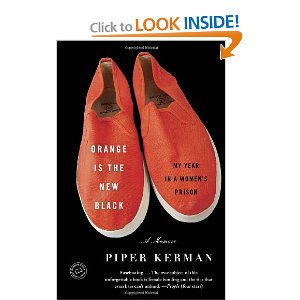 Orange is the New Black: My Year in a Woman's Prison by Piper Kerman
Orange shoes on the cover (courtesy of Amazon.com)
but on the Netflix version on TV there were blue shoes
(note: first favorite line...Piper: Oh they're kinda like Toms Guard: Toms? then Piper explains Toms...that's about when I started giggling, with my hand over my mouth like I wasn't & knew too that I wouldn't miss any more lines right)

Twitter
@OITNB @OrangeWriters
(or all the actors who have Twitter too--I have, not yet, gone that far...)
Hashtags
#OITNB #OrangeWriters
or #AskOrange when they have that Tweet the Cast going on 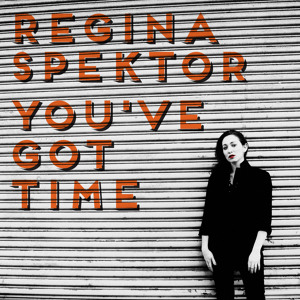 Then there is the Series Song--You've Got Time by Regina Spektor on YouTube...
http://youtu.be/w9_isl1jjHc

Regina Spektor webpage...
http://www.reginaspektor.com/youvegottime
(note: where I find no Tour Dates for the USA...if I could be in the UK or Stockholm or Belgium or Krakow or Prague...sigh...but no I will not be there, so I have to wait--tho there is YouTube, for now)

OITNB Opening Credits with the song You've Got Time by Regina Spektor...
http://www.youtube.com/watch?v=fBITGyJynfA

Then you find the article that makes it better--Orange is the New Black Withdrawal? 13 Things You Can Do...
http://abcnews.go.com/Entertainment/orange-black-withdrawal-13-things/story?id=19746831

(note: what I've done so far off the list...#2 Buy the Book, #3 Listen to the Song, Repeat, #11 follow on Twitter/Facebook, #1 Listen to the Real Piper Kerman TV Interview...she sounds a lot like the actress when she's being all serious or perhaps it's the other way around & the actress did a very good job at studying her character)

See them interviewed together on Hey You Guys Co. UK - Piper Kerman author/writer of the book & Taylor Shilling/Piper Kerman character on OITNB... 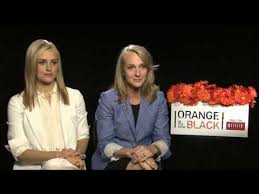 
IMDB - Orange is the New Black...here you can look up all the actors & what movies/TV they did before, or even if none at all (lucky b*tches for this to be their First Acting Gig huh?!)
http://www.imdb.com/title/tt2372162/

IMDB - about the Writer/Producer/Actress: Jenji Kohan...
http://www.imdb.com/name/nm0463176/?ref_=tt_ov_wr
(note: I did not watch Weeds...I have a feeling I should have, maybe I still will--while I'm waiting/withdrawing from Orange is the New Black...but then I don't watch TV/TV Series...there's something like a hundred of them too...sigh...so many--will they last until S2 of OITNB)

Splitsider Nov 2011 - Jenji Kohan...
http://splitsider.com/2011/11/trade-roundup-pilots-from-weeds-happy-endings-and-everybody-loves-raymond-producers-affion-crockett-canceled/
(note: she's wearing my Jewish neighbor friend's glasses from when I was in Elementary School...and nevermind the rainbow hat...she could be off color Crazy Eyes on Orange is the New Black, until she lets her hair loose...I like this photo of her, before Weeds, before OITNB)

Then there is this Transgender, Sophia--which come to find out, is, & the pre-transgender parts were played by 'her' twin brother (who is not an actor) in the backstory episode...
http://www.huffingtonpost.com/2013/07/26/orange-is-the-new-black-laverne-cox_n_3660712.html
(note: who could make this stuff up, is truth stranger than fiction? I keep finding it so...also I like her character a lot, I like a lot of the characters a lot--I can't wait to read the book to find out more about the characters, their backstories, if they match anything to the parts being played on the Netflix TV Series...then to top that all off--Jodie Foster directed this episode, or so the Huffington Post article says so)

An Excerpt from the Interview on HitFix (about Jodie Foster coming in for an episode)...


[HitFix: And how did Jodie Foster come to direct the third episode?
Jenji Kohan: Truthfully, Jodie got a project at Showtime and realized that she'd never done television before and, to her credit, wanted to say, "Lemme try this to see how this goes before I go do my own thing." And when Jodie Foster says, "I wanna do this," you say, "Yes." So she came to us and I think we were sort of her dry-run for when she does her television thing.
HitFix: And based on what you saw, how do you think she'll do?
Jenji Kohan: Look, I think she's super-smart and really good. Movie directing is different from TV directing and I think some things were like a culture shock for her because, in way, you know the director's not the king in TV. It's more collaborative with the writers than she's used to. I hope she has a lot of power on her show [She laughs] so she can really do it all her way. That said? She was incredibly collaborative and really game and came in saying, "I haven't done this before. It's a learning curve." She was just delightful and she's really, really smart and really talented. And fast!]

OK--have obsessed, withdrew enough, about #OITNB or at least on a Blog...cheers 'n prison cheesecake until S2, next year?? - now to go find out how to make Cronuts that all the #OrangeWriters are eating in NYC...sigh...since they don't seem to sell them elsewhere--how unfair is that?! I do love them all tho, as long as they keep writing this series--no matter what they're eating, if that's what it takes then by all means...

Further Note--as far as I can tell there is no connection what so ever to Louisiana or Lafayette...but when I do find one I will mention it...for now there's only that I am in Lafayette & I am watching this & will be watching this (but then there's who's to say where I'll be for S2...not wearing Orange is about all I know for sure right now?!) 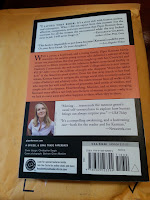 so here's the back cover 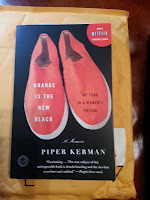 note: so now tonight I 'know' what I'll be doing (into the wee hours)
has nothing to do with screwdrivers either btw, hmm... ;oP
bah--I'll be reading 295 pgs plus some after words...

Article Title...My First Writing Job: 'Orange is the New Black'
(I can hardly imagine--it makes me want to swear, but nicely...)

noted: 5 women, 2 men write for Orange she states...and I count something like 53 women, 20 men on the cast list of Orange off of IMDb's webpage

from Ginger Haze on TooMuchNick...
"...my favorite character is everyone"
(that's what I think!)
I like her character drawings too
and that's just 12 of them