Throw it to the Dogs Mister?!

Photos to remember the parades by following: 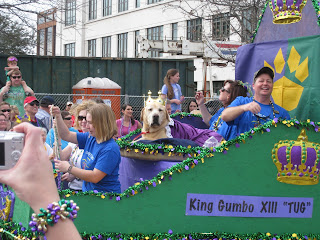 Krewe des Chiens - The King, Tug
(does he look royal in his attitude or what - he'll also turn
his head here to the left & then slowly to the right...as if
he's doing a parade wave to the crowds of his adoring subjects?!) 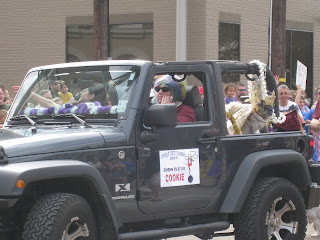 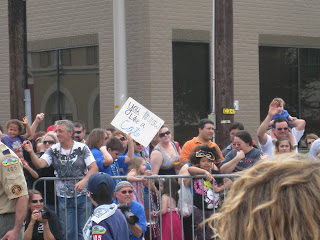 Best Mardi Gras sign at the Doggie Parade...
"You Throw Like a Cat"
(of course lots of beads were thrown his way?!) 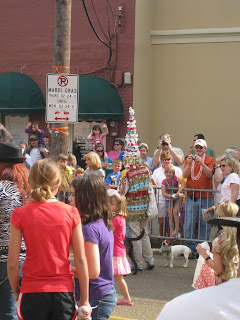 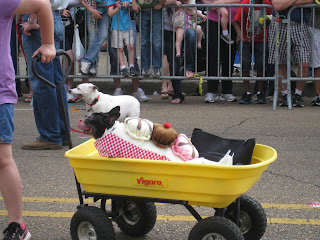 Now I know for sure that Cupcakes are a big thing back in the US...
Here is one of a pair of Cupcake Pooches, the other actually walking in the Doggie Parade?! 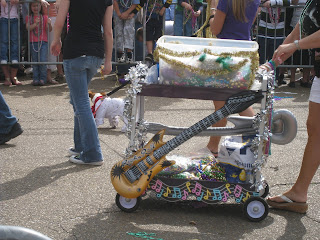 Yes the 'real' King was also at the Krewe des Chiens Parade...
Elvis was of course in the Costume Contest before the Doggie Parade began?!
﻿ 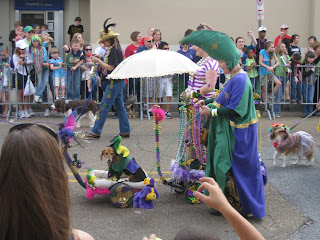 what can I say--weirdest woman's costume in the Doggie Parade?!﻿ 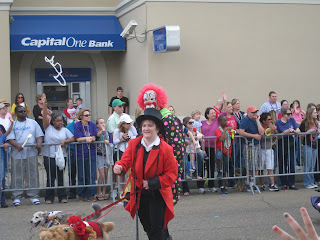 absolutely the scariest Doggie Parade owner costume, not hers -
the ringmasteress...but him--'the' Clown (from like Outer Space?!)
I'd say "keep walking & throw me nuthin' mister?!" 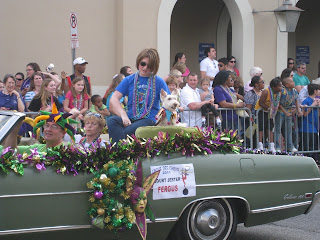 Court Jester - Fergus...
It's so obvious he would be the Jokester of the court,
perched on his green pillow - you just had to laugh...
Yes, there is a full court here today & the past court too -
there was as well a dress ball to follow for the Krewe des Chiens (of course?!) 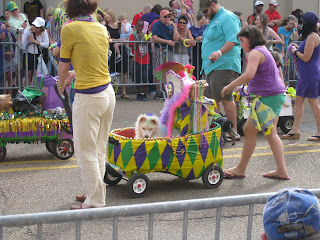 loads of decorated wagons for the non-paraders & also the non-court pups...
while the court of the Krewe were in cars or on floats, with their human pages?! 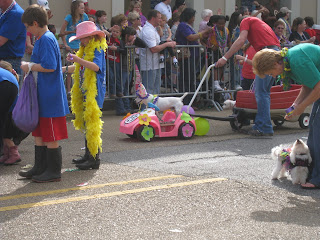 best parade riding pooch, who looks like could of paraded...
but oh so cute in kiddie car instead right?! 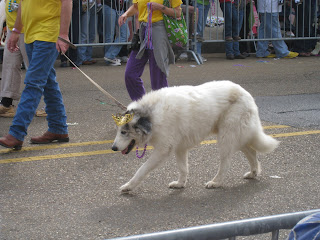 some royalty walked with their subjects, her tirara is slipping...
where's a good page when you need them these days?! 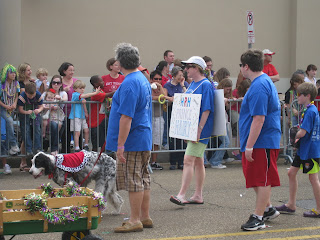 HRH - Prince Harry...was also in attendance at Krewe des Chiens Parade?!
(these are all obviously Brits in their blue t-shirts) 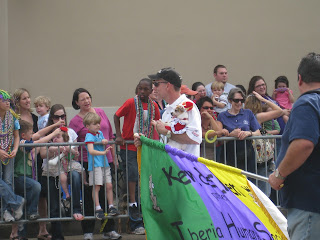 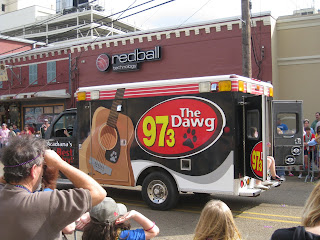 local radio station--The Dawg 97.3
How could they "not" be in the Doggie Parade right?! 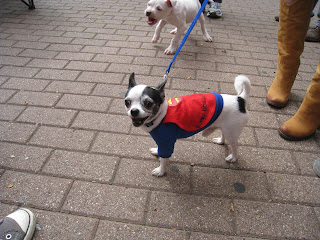 Super Chi was in the crowd, watching the Krewe des Chiens Parade...
(his partner up in arms was named TiraMissSue - think Italian desserts?!)
End of my Day with the Dogs on the Streets...
A lot of fun, maybe the best of all the Mardi Gras parades & hardly any beads to show for it either?!
Having been outta the country for 2 yrs & also outta the nearly a foreign country within the US,
aka Southern Louisiana, for even more years - I was determined to attend all the parades for the 2 weekends before/during Mardi Gras here in Lafayette...compared to New Orleans that goes for like 2 whole weeks I think, we did not drive the 2 hrs over for their parades either when these are like a 5 min. drive to downtown?!
And I do not ever remember there being a Doggie Parade before, so this was a great unexpected
fun crazy day of surprises for sure for me?!
More parade photos to follow next post & a video too--
Next up, Throw it to Norway Mister?!
﻿
Posted by Sharon In A Volvo at 12:50 AM