Aristophanes -The Frogs revisted, not the Greek's version, followed by the staged Dr. Horrible's Sing-Along Blog, not the short/interent film...a double bill of one act original musicals, in 2 hrs - of so much fun didn't notice the time passing & that was actually watching 2 plays?!

In the orginal Greek version there are 2 Greeks in the War of the Words: Aeschylus & Euripides, while in this revist (adaption) by Cody Daigle the Battle of the Genius is between: George Bernard Shaw & William Shakespeare (study up on those plays/dialogs before reading/watching to better grasp the tit for tat dualing between these two...)
I was well surprised & to think in Lafayette too at the Cite des Arts on Vine - parked for 5 bucks when the show only went for 8 bucks, also bought a lapel pin to help the cause (after watching I'm glad I did both, bought a pin & a ticket...)

Me sitting up high in the dark recesses on my own overlooking the simple stage, the young actors & very little stage props or costumes were involved yet still captivating - which is how theater should be I'm thinking, am too thought what this musical would like like in London's Theater District (as I have only been to one show there, Wicked - which was just that, again wicked fun...) 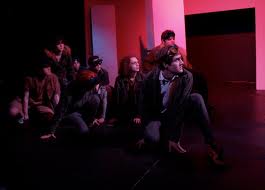 ﻿The (Frog) Chorus.."Brekekekex ko-ax ko-ax"
(esp liked the big round green goggles & the stance of the froggie performers, not to mention this great sound for a frog chorus - besides the rest of the fun musical score by Roy Bertucci?!)

Photo Credits - borrowed from local theater blog with more photos, go check ém out too (since figured they would not like me copying all of them probs)...
http://acadianatheatrehappenings.blogspot.com/ 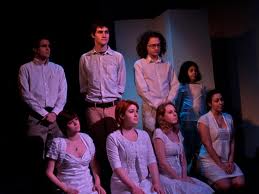 The Chorus in a more serious, dressed in white moment...
Read more here about the original Greek version of Aristophanes The Frogs - I had to buy a Greek Drama paperback book (by Bantam/Dell) to read it, couldn't find it online...
http://en.wikipedia.org/wiki/The_Frogs
Of course now I bought the book & read the play, "then" I find it to read online...so you can too - here:
http://www.greektexts.com/library/Aristophanes/The_Frogs/eng/244.html
Read more about the original July 2008 film/internet Dr. Horrible...on Wikipedia (of course)...
http://en.wikipedia.org/wiki/Dr._Horrible's_Sing-Along_Blog
Note: iTunes Store has the music & there's a CD too (must go look for that next) - Oh my & DVD/Blu Ray as well...(how did I miss all this multi-media fun?!) Orig banner - from Wikipedia
Another Note from reading Wiki: Who knows there may be a sequel for Dr. Horrible too?! Now for them to get Neil Patrick Harris off his TV series - How I Met Your Mother to play in it as Dr. Horrible once again... 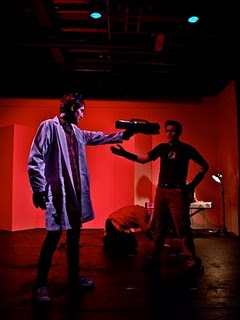 Dr. Horrible & Captain Hammer on stage at Cite des Arts - Lafayette, LA
Note: will add more from the double plays program when I can return to the Americas Coffeehouse with free WiFi & a real good attempt at a Cortado...mmm...

OK--make that Coffee Cottage in the Oil Center instead (mixing it up...)

"From the start, it has been the theater's business to entertain people...it needs no other passport than fun." Bertolt Brecht

"Both shows speak to loftier things, yes. The Frogs concerns itself with the challenges of change and the power of Art. Dr. Horrible's Sing-Along Blog looks at the price of ambition and the difficulty of forging connections in the world of the World Wide Web.

But the real connective tissue between these two shows is a belief that the theater is at its most powerful when it entetains. When it aims for joy. When it speaks from the heart...

...We hope the shows entertain you; and, as one of the characters in The Frogs sings, "If one of you should leave tonight/with something in your heart/we have done what we have come to do."

No more, no less.
Enjoy the show,
Cody Daigle

Note: Again borrowed the Director's Note from the program, thank you AUI/AURA?!
Posted by Sharon In A Volvo at 5:25 PM